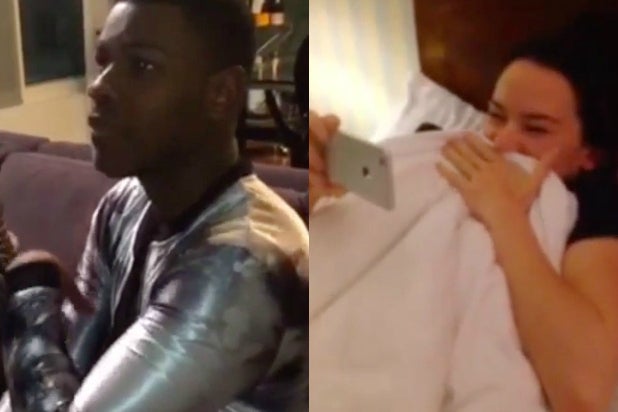 The new “Star Wars” protagonists got good and emotional watching themselves in the latest trailer for “The Force Awakens,” and Instagram has the video evidence.

First up, John Boyega attentively watched the commercial — which debuted during ESPN’s “Monday Night Football” — on TV, wearing a very shiny shirt. He was captured confidently repeating “Yep. Yep. Yep.” over and over again.

But Boyega wouldn’t stay so cool throughout: The tail-end of the thing caused him to lose it and jump over the couch.

A more subdued Daisy Ridley tuned in via her iPhone while in bed. The woman behind Rey was moved to tears, declaring, “Oh my God, it’s amazing.”

Based on the Internet’s take, both were right.

THE TRAILER IS JUST EEEEPPPPPPPIIIIICCCCCCC! Star Wars is back! gaaaaaad laaaaard! You know what! Let me just relax because this kind God oooo! Lmao! Seriously congrats to everyone ! December 18th!

Staying in a little b’n’b with my friend… Set an alarm to watch the trailer… My friend filmed my reaction. Totally emotional seeing it for the first time and so so so incredibly awed to be part of this incredible legacy #starwars #theforceawakens   A video posted by @daisyridley on Oct 19, 2015 at 8:06pm PDT