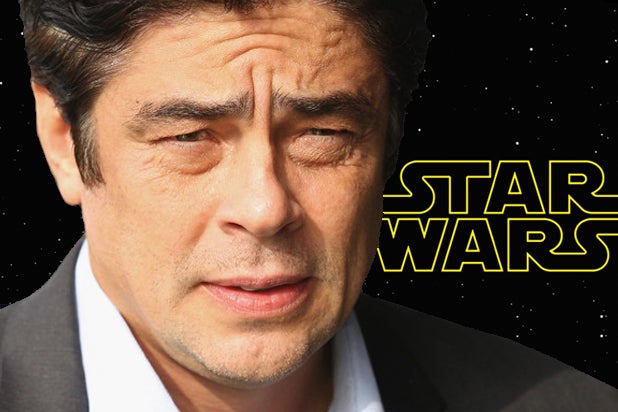 Benicio del Toro has the offer to play the villain in “Star Wars: Episode VIII,” multiple individuals familiar with casting process have told TheWrap. Discussions are still in the very early stages, but Disney and Lucasfilm are high on the Oscar-winning “Traffic” star.

A representative for Disney did not immediately respond to a request for comment.

Del Toro would be a strong fit for the sci-fi sequel, as he’s able to conjure menace on a whim. He’d also continue “Force Awakens” director J.J. Abrams’ diverse vision for the “Star Wars” universe that will be led by John Boyega, Daisy Ridley and Oscar Isaac going forward.

Rian Johnson is directing “Star Wars: Episode VIII,” which is expected to start shooting early next year in advance of a May 26, 2017 release date. Ram Bergman is producing the film with Lucasfilm’s Kathy Kennedy.

Del Toro is already a member of the Disney family, having played a fun yet small role as The Collector in Marvel’s “Guardians of the Galaxy,” though he has indicated that he may not return for the upcoming sequel due in 2017.

Del Toro won an Oscar for his supporting performance as an honest Mexican cop in Steven Soderbergh’s “Traffic.” He’ll soon be seen alongside Emily Blunt in Denis Villeneuve’s crime drama “Sicario” and in an untitled Terrence Malick movie.