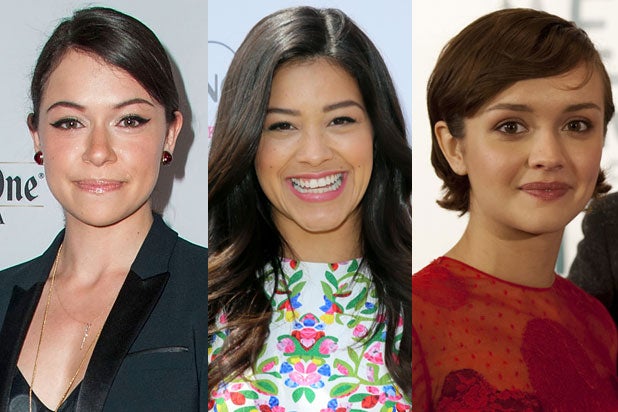 Insiders insist it’s early in the casting process and that Johnson is still auditioning actresses, with several rising stars yet to read for him. Others suggest that Johnson is narrowing down the field and that Rodriguez, Maslany and Cooke will be among a group of girls slated to chemistry-read with “The Force Awakens” star John Boyega before the end of the month.

A representative for Disney declined to comment. The studio will release the sci-fi sequel on May 26, 2017. Ram Bergman is producing the film with Lucasfilm’s Kathy Kennedy, and production is expected to start early next year.

Oscar winner Benicio del Toro is nearing a deal to play the villain in “Star Wars: Episode VIII,” for which plot details remain unknown. However, the Internet has taken it upon itself to speculate that Han Solo’s daughter could be introduced in the film.

Rodriguez starred in the acclaimed indie drama “Filly Brown” before landing the title role on the CW’s “Jane the Virgin,” for which she won a Golden Globe. She has demonstrated she can play a strong female lead, and she next stars opposite Mark Wahlberg and Dylan O’Brien in Peter Berg‘s action drama “Deepwater Horizon.”

Maslany was a finalist for the lead role in “Rogue One: A Star Wars Story,” though the coveted part ultimately went to Felicity Jones. Still, Maslany must’ve made a strong impression on Disney and Lucasfilm executives to be back in the mix for “Episode VIII.” In addition to playing multiple characters on “Orphan Black,” Maslany recently played the younger version of Helen Mirren‘s character in “Woman in Black” and wrapped the indie movie “Two Lovers and a Bear” with Dane DeHaan.

Cooke stars on “Bates Motel” and drew widespread acclaim for her impressive performance as a young cancer patient in “Me and Earl and the Dying Girl,” which won both the Grand Jury Prize and the Audience Award at Sundance. She has been in demand ever since, and is in the mix for the female lead in Steven Spielberg‘s “Ready Player One.” She’ll continue to showcase her range as a teenage prostitute in the indie drama “Katie Says Goodbye.”