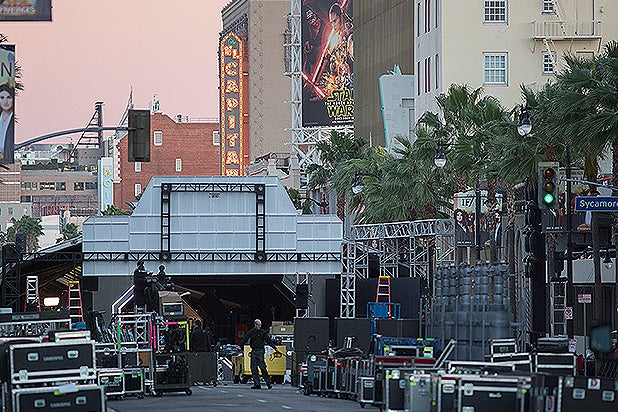 The Force faithful were in orbit on Hollywood Blvd. and the rest of the nation on Monday, with the opening of Disney’s blockbuster-to-be “Star Wars: The Force Awakens” now just days away.

What could be the biggest movie premiere ever will be held on Monday night at Hollywood Blvd.’s Dolby Theatre — home of the Oscars — El Capitan Theatre and TCL Chinese Theater. The premiere for the first “Star Wars” movie was held at the TCL when it was known as Graumann’s Chinese Theater back in 1977. But this debut is so big, it will screen in three movie houses.

Anticipation for “The Force Awakens” made last weekend’s box office almost an afterthought, and the numbers showed, with “The Hunger Games” finale placing first for the fourth week in a row with a paltry $11.3 million. The combined total of the top five films — “In the Heart of the Sea,” “Creed,” “The Good Dinosaur” and “Krampus” followed the leader — was just over $50 million. That’s roughly the same total that advance ticket sales for “The Force Awakens” reached more than a month ago.

“This is definitely the calm before the storm,” said Rentrak senior media analyst Paul Dergarabedian, referring to the coming weekend. Fox’s animated family favorite “Alvin and the Chipmunks: The Road Chip” and Universal’s comedy “Sisters,” starring Amy Poehler and Tina Fey, also roll out on Friday.

Hordes of “Star Wars” fans have been camped on the streets outside the theaters since last Sunday. On Monday night they’ll be watching the red carpet, hoping to catch a glimpse of director J.J. Abrams and original stars Harrison Ford, Mark Hamill and Carrie Fisher, as well as the young new faces like John Boyega and Daisy Ridley that will populate the franchise in the years to come.

Those fans have come from all over the world, including an Australian couple who planned to tie the knot in “Star Wars” style on Monday.

“The Force Awakens” debut is “triple the magnitude of a typical premiere,” Los Angeles officials have said. Extra LAPD patrols and more officers on foot have been assigned to the area, with several streets blocked to traffic. A half-mile stretch of Hollywood Blvd. between Highland and La Brea Avenues has been closed since Friday.

The action wasn’t contained to Hollywood. Downtown’s L.A. Live entertainment center was the site of a “Star Wars” experience where kids could clash light-sabres and get a pat on the head from actors dressed as the famous characters from the films, like Hans Solo, Luke Skywalker, Princess Leia, Chewbacca and iconic robots R2-D2 and C-3Po.

Other fans sought to catch up on their “Star Wars” history and headed to the Internet to download the earlier films, with sites like iTunes, Google Play, Vudu and Amazon doing landmark business.

In Austin, Texas, the Alamo Drafthouse is testing fans’ endurance. It plans to screen the entire “Star Wars” saga ahead of the debut of “The Force Awakens.” For those who survive the 16-hour marathon without nodding off, “The Force Awakens” will then play repeatedly until one fan remains awake. The winner gets a seven-year movie pass — and a bunch of “Star Wars” swag.

Breaking records has been the norm for “The Force Awakens,” which has put up unprecedented numbers in terms of trailer views and advance ticket sales.

The first film in the iconic sci-fi series in more than a decade, “The Force Awakens” is expected to receive the largest rollout in history and screen in a record 4,445-plus theaters in North America, beginning with Thursday night preview shows and Friday’s opening day.

It will also open simultaneously in every major market worldwide, and another premiere is set for London.

“The Force Awakens” is expected to challenge virtually every box-office record, including largest opening weekend, set earlier this year by “Jurassic World” at $208 million, and largest global take ever, set by “Avatar” at $2.7 billion in 2009.