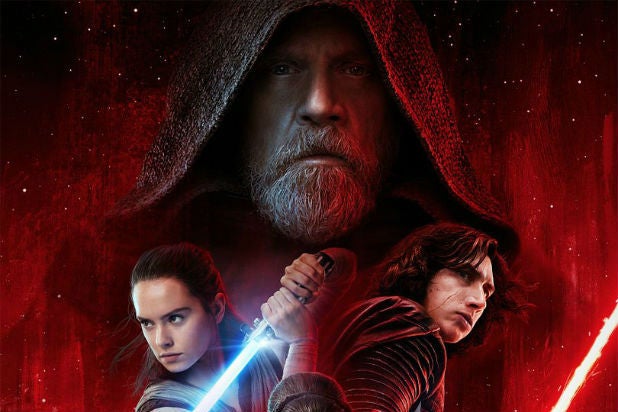 After 16 days in theaters, “Star Wars: The Last Jedi” has crossed the $1 billion mark at the global box office. It’s the third-fastest film in box office history to hit that mark, sitting behind “Star Wars: The Force Awakens” at 12 days and “Jurassic World” at 13 days. With a domestic total of $517 million, it will also close 2017 as the highest-grossing release of the year, passing the $504 million made by “Beauty and the Beast” back in the spring.

“The Last Jedi” posted the biggest Friday-to-Friday drop of any “Star Wars” movie, falling 76 percent from its $104 million opening day total. But this weekend was the opposite, with Friday’s $19 million from 4,232 screens being only a 23 percent drop — the second lowest ever for a film with a $100 million-plus opening behind “Rogue One” — while the film made $52.4 million in its third weekend, just a 25 percent drop. The combination of a $220 million opening weekend and a second weekend in which the typically slow Christmas Eve fell on a Sunday exacerbated the first weekend drop, but “Star Wars” has made up that loss with strong holds on what has been a very robust New Year’s weekend.

But “Star Wars” isn’t the only film giving movie theaters a reason to smile. “Jumanji: Welcome to the Jungle” is also proving to be a moneymaker, as it finished just a step behind “Last Jedi” with an estimated second weekend of $50.5 million. New Year’s Day estimates will push that total to $70 million, giving it an estimated running total of $186 million through the end of Monday. Strong word of mouth has helped the film pick up steam with family audiences coming out of Christmas Day, with four-day estimates showing a 26 percent boost over the $55.4 million made over Christmas weekend.

Another film that is increasing its numbers this weekend is Fox/Chernin Entertainment’s “The Greatest Showman,” which had a disappointing start last weekend but is now looking at a $15.4 million second weekend, a 75 percent jump. Include Monday’s estimates, the Hugh Jackman musical is looking at a four-day total of $20.5 million, a 43 percent increase, for a total of $54.1 million.

While Universal’s “Pitch Perfect 3” didn’t boost its numbers this weekend, it also posted solid numbers and will stay in third place, sitting between “Jumanji” and “Showman” with a $17.7 million 3-day/$22.7 million 4-day total, a drop off of just 14 percent that will give it a total by Monday’s end of just under $70 million. Fox/Blue Sky’s “Ferdinand” completes the top five with $11.5 million three-day/$15 million four-day to bring its three weekend total through Monday to $57 million.

In total, the holiday season has been a very fruitful one for theaters, as domestic totals since the release of “Last Jedi” on Dec. 15 have topped $1 billion, pushing the annual total over $11 billion for the third year in a row despite the worst summer box office season in 11 years. 2018 is expected to see a flip in that trend, as Disney is pushing their next “Star Wars” release, “Solo,” up to May. Without the boost of X-Wings and lightsabers behind it, 2018’s holiday season should see a major drop-off from this year, but that should be made up for with a stacked summer lineup that includes “Solo,” “Avengers: Infinity War” and “Deadpool 2.”