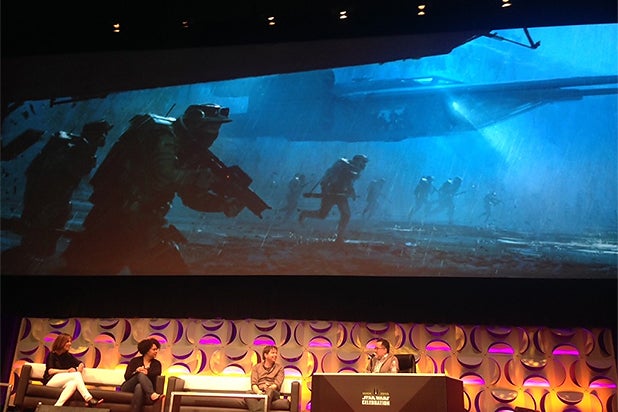 A plot to steal the Death Star will be at the center of “Star Wars: Rogue One,” the official Star Wars account tweeted on Sunday.

“A band of resistance fighters unite for a daring mission to steal the Death Star plans in Star Wars anthology film, Rogue One,” the message said.

The news came on the final day of the Star Wars Celebration in Anaheim. During a panel with Lucasfilm president Kathleen Kennedy, Lucasfilm vice-president of development Kiri Hart and Gareth Edwards, the director of the spinoff, the first teaser trailer was also revealed.

Felicity Jones, who was previously confirmed to star in “Rogue One,” will play a rebel soldier. The film will take place between the events of Episode III, “Revenge of the Sith,” and the original “Star Wars” film, “A New Hope.”

“It’s about the fact that god’s not coming to save us, and we’re on our own,” Edwards told the crowd. “The absence of the Jedi is omnipresent in the film. It hangs over the whole movie.”

Edwards also revealed that shooting was to begin this summer in the UK and around the world, before rolling the brief first teaser for the film.

“For over a thousand generations, the Jedi Knights were the guardians of peace and justice in the Old Republic,” a voice-over from Obi-Wan Kenobi says in the trailer. “Before the dark times… before the Empire.”

During the panel, Edwards also made clear that it was a combat movie. “It’s called ‘Star Wars,'” he joked.

The panel was to have featured an appearance from Josh Trank, who is also attached to direct a “Star Wars” spinoff film, but the director was a last-minute no-show.

Trank later explained his absence on Twitter. “Hey all. So, so, so sad to have missed today. Worst flu of my life. I hear it went beautifully with Gareth. Here’s to next year. #SWCA,” he tweeted.