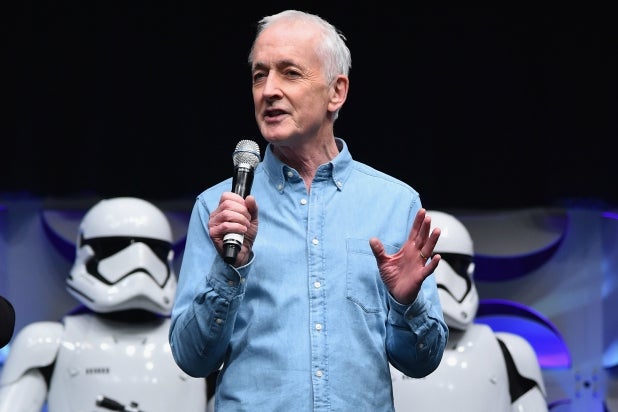 Anthony Daniels has played a moody, sarcastic droid now in all seven “Star Wars” films — including the coming “Force Awakens” — and a new candid interview proves the outspoken actor proved the actor was perfectly cast.

“The secrecy has been beyond ludicrous,” he said of Disney’s confidentiality push. “For heaven’s sake, it’s a movie. When I got the script, it was typed in black on paper of the deepest red so you couldn’t photocopy it. I got a hangover just reading it.”

Daniels’ candor got him in trouble recently with the studio — this time on Twitter.

“I said that I’d met so-and-so. An actor who plays a … thing in the film. A character,” the actor recalled for The Guardian. “Immediately I received a message from Disney: ‘Remove the tweet! You’re not allowed to say that!’ Honestly. It’s a kind of Kremlin attitude. Look, I know perfectly well not to tell you now what I’m giving you for a Christmas present because it would spoil the surprise. And these films are all about opening the box on Christmas Day.”

Despite his disagreement with the politics behind the filmmaking process, Daniels is signed on for the two additional “Star Wars” films after “The Force Awakens.” He also clearly has an affinity for his tin robot, which was just an acting job so many years ago. And he did have some praise for others, much of it reserved for new director JJ Abrams.

“George has changed a lot over the years but I think he finds it slightly hard to collaborate,” Daniels said of creator Lucas. “He made decisions that I believe might have been better discussed with other people. J.J. is more collaborative. He likes to listen.”

“It became clear early on that with J.J. we were getting back to the old-fashioned kind of film-making,” he continued, blasting CGI as a replacement for physical props. “We have walls. Actual sets!”

He probably wishes that Abrams’ sensibilities were around for the three prequels, which Daniels doesn’t seem in love with.

“The effects are clever but pointless,” he said. “The skill is there, but so what? Coldness, that’s the word. Bleakness, even.”