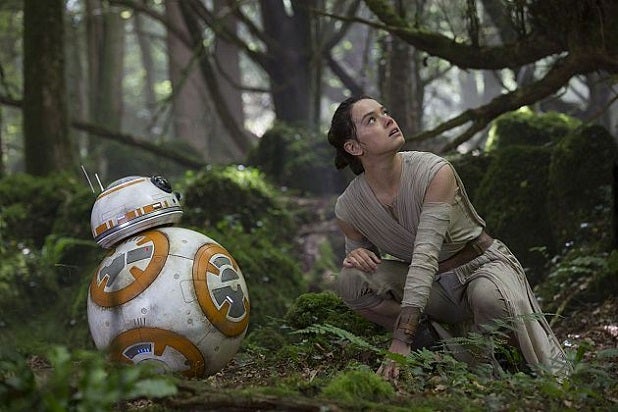 “Star Wars: The Force Awakens” fell out of the top for 10 at the North American box office for the first weekend since its record-breaking debut back on December 18.

Disney’s blockbuster brought in an estimated $3 million from 1,433 locations, its lowest theater count yet, down 158 from last week — and the J.J. Abrams-directed space epic still fell just 28 percent.

It was beaten out for the last spot on the list by “The Revenant,” which brought in $3.8 million from 2,310 theaters for the 10th spot. The frontier vengeance tale is directed by Alejandro G. Inarritu and stars Leonardo DiCaprio and Tom Hardy. The director, leading man and supporting actor are all contenders for honors at Sunday night’s Academy Awards.

Also Read: Oscars Preview: It's All About DiCaprio and Diversity

The 10-week run in the top 10 for “Star Wars: The Force Awakens” isn’t that special — it ranks 139th on a list topped by “E.T.: The Extra-Terrestrial” (44 weeks), “Beverly Hills Cops” (28) and “Tootsie” (27), according to Box Office Mojo. But none of those faced today’s year-round competition or were as incredibly front-loaded as “The Force Awakens.”

Disney executives are far more likely to be counting money or plotting new galaxies for spin-off films than they are to be weeping. That’s because the run of “Star Wars: The Force Awakens,” which now ranks at the top-grossing film in U.S. history with $926 million, has been impressive to the say the least.

“The Force Awakens” rang up more than its share of records, including the best opening day ($119 million) and opening weekend, domestic ($248 million) and worldwide ($529 million), and best December and PG-13-rated debuts ever. It also made it to $1 billion at the global box office in 12 days, the fastest any movie ever has.

Even more important than the grosses to Disney was rebooting the dormant franchise, and they did it in style. The Gareth Edwards-directed spinoff “Rogue One: A Star Wars Story” arriveson Dec. 16, “Episode VIII” lands in 2017, and an untitled Han Solo project is set for 2018. Each could potentially bring more momentum, not to mention the merchandising and licensing opportunities that Disney monetizes better than any studio.

In addition to its $2 billion in worldwide box office, “The Force Awakens” alone could generate more than $5 billion in peripheral revenue, analysts say. That’s a nice return on Disney Chairman and CEO Robert Iger’s bold $4 billion bet on Lucasfilm and the “Star Wars” rights n 2012.

“Disney has certainly provided the blueprint for how to properly shepherd a crown jewel movie brand to the marketplace and make it a box office juggernaut, a social media darling and a critical hit and make it look easy,” comScore senior analyst Paul Dergarabedian told TheWrap.

“The Force Awakens” stars Daisy Ridley and John Boyega in the key roles as Rey and Finn along with original “Star Wars” stars Harrison Ford as Han Solo, Mark Hamill as Luke Skywalker and Carrie Fisher as General Leia. “The Force Awakens” is set 30 years after the events of 1983’s “Star Wars: Return of the Jedi.”

The production budget on “The Force Awakens,” from Abrams’ Bad Robot and Lucasfilm, was $200 million. Bryan Burk and Kathleen Kennedy produced along with Abrams, who shared screenwriting duties with Michael Arndt and Lawrence Kasdan. John Williams composed the score.