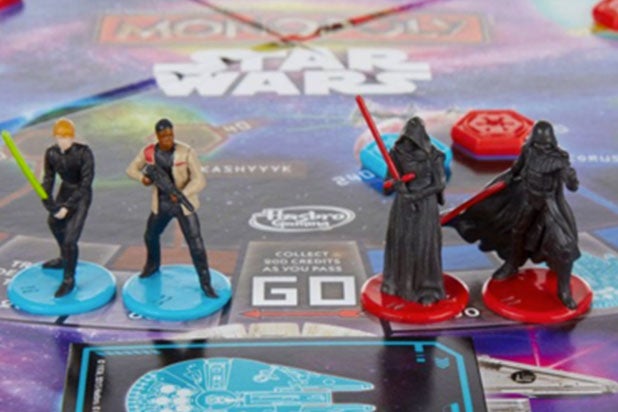 It’s clear to most people who have seen the new “Star Wars: The Force Awakens” that Rey is one of the film’s main characters — however, Hasbro has decided not to include her in yet another one of its toys.

Amazon offers a “Star Wars” edition of the classic Monopoly game for $25, which includes four character tokens: Kylo Ren, Finn, Luke Skywalker and Darth Vader. However, Rey, who is considered the hero of “The Force Awakens” and undoubtedly one of its main characters, isn’t featured.

Throughout November, fans used the hashtag #WheresRey on social media to protest the absence of the character’s likeness in a box set of action figures from the film, as well as a lack of Rey-themed toys in aisles overall. Kylo Ren, Chewbacca, Finn, Poe Dameron, a Stormtrooper and a TIE Fighter pilot were included in the set, however, igniting criticism of the store and Hasbro for including two generic troopers while excluding Rey. Captain Phasma, played by Gwendoline Christie, is also missing.

This came after Hasbro, the main manufacturer of Disney toys, recently excluded Black Widow from boxed sets for “The Avengers” and Gamora from “Guardians of the Galaxy.”

Despite stores like Toys “R” Us and Target selling more Rey toys where they are “flying off shelves,” it seems that Hasbro still decided to refrain from including Rey. Richard Gottlieb, from Global Toy Experts, spoke to TheWrap last month and attributed this to a belief in the toy industry that boys won’t play with girl action figures, and that “Star Wars” has always been considered a “boy’s brand.”

“I, of course, have no idea about the decision-making about this product,” Gottlieb said, “but I can say that there is, in the toy and movie industry, a long-standing belief that a boy will not go to a ‘girl’ movie and that if you put a girl in a boy’s toy, boys will not buy it.”

People on Amazon have pointed out the missing Rey token, some even returningupon finding out that Ridley‘s character was absent.

“Really? You DON’T include a ‘Rey’ game piece to use with this?!?!” one buyer commented. “Why this game left out ‘The Force Awaken’s’ main protagonist baffles the mind … and is inexcuseable. This is even more inexplicable given that Disney and Lucasfilm have stated they are pushing for more ‘girl power’ and strong females in the movies. And … only four players can“

“It is (as has already been stated multiple times in these reviews) RIDICULOUS and SEXIST that of the four playable characters, there are no women,” another wrote. “Rey is the protagonist of the film, for crying our loud!”