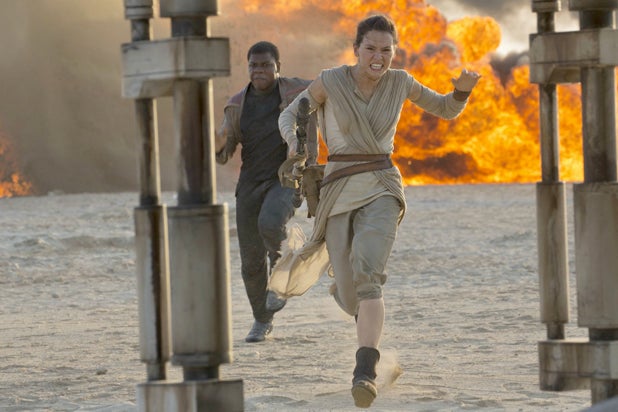 “Star Wars” is proving to be out of this world, breaking another industry record with a $100 million-plus Friday — the first triple-digit-million day in box office history. Insiders tell TheWrap that the tally could reach as high as $130 million by the time Friday night becomes Saturday morning.

This tops the previous $91.1 million record held by “Harry Potter and the Deathly Hallows Part 2” in July 2011. “The Force Awakens” is also on track to blow past the opening weekend record of $208.8 million set by “Jurassic World” in June.

Because “The Force Awakens” is entering uncharted box office territory, typical moviegoing patterns make it difficult to forecast where the film’s opening weekend tally may wind up. After all, there were long lines for “Star Wars” at 5:15 a.m. outside of the Chinese Theater in Hollywood.

Despite many sold-out shows, there are still plenty of seats available for “Star Wars,” as many theaters throughout the country are staying open 24 hours a day in order to screen the movie around the clock.

“There are literally millions of tickets available for this weekend, and exhibitors have a lot of flexibility in terms of capacity and increasing the number of shows based on demand,” said Dave Hollis, EVP of distribution at Disney.

“With the increased demand for ‘Star Wars,’ we will continue to add showtimes to accommodate the avid fans that have been eagerly awaiting the seventh film in this blockbuster series,” said Amy Miles, CEO of Regal Entertainment Group.

“Star Wars” crossed the $100 million threshold on the strength of its Thursday night previews, which grossed an incredible $57 million — $13.5 million more than the “Harry Potter” finale. For additional context, the opening weekend record holder “Jurassic World” grossed only $18.5 million from Thursday previews. “The Force Awakens,” which opens in 4,134 theaters, is expected to break more box office records throughout the month.

In weeks leading up to the film’s release, “The Force Awakens” also beat several other records. Previously, the movie had already outsold previous single-day record-holder “Hunger Games” by an 8-to-1 margin at Fandango, and a 10-to-1 margin at MovieTickets.com. No film had over $1 million in advance IMAX sales, but “The Force Awakens” had $6.5 million — one month later, advances sales totaled $50 million — another record.

The film also beat the record for most views of a trailer in 24 hours, and is looking to be the fastest film to reach $1 billion globally — “Jurassic World” took 13 days to do it earlier this year.

3D amounted to about 47 percent of the night’s grosses, and IMAX made $5.7 million from 391 screens, which almost doubled the previous record of $3 million, held by “Avengers: Age of Ultron.”

The first “Star Wars” film grossed $461 million dollars domestically in 1977. However, the highest grossing installment was “Episode 1: Phantom Menace,” which made $474.5 million in 1999.

And before “The Force Awakens,” “Episode V: The Empire Strikes Back” was the best-reviewed installment in the series, with a 94 percent score on Rotten Tomatoes. Currently, “The Force Awakens” stands at 95 percent.