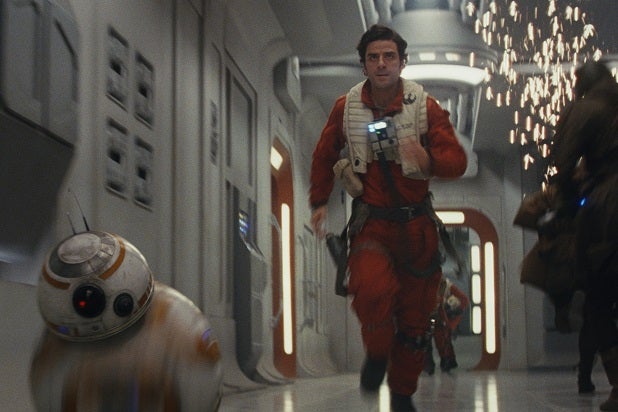 After a global opening weekend of $450 million, “Star Wars: The Last Jedi” added $43.8 million on its first Monday and will cross the half-billion mark on Tuesday after just five days in theaters.

Domestically, “The Last Jedi” has posted the third-highest Monday in box office history with $26.1 million, only behind its fellow “Star Wars” installments, “The Force Awakens” ($40 million) and “Rogue One ($32 million). It should be noted that more kids were on Christmas vacation when those two films came out, as “The Last Jedi” opened with 31 percent of schoolkids on break compared to 77 percent for “The Force Awakens.” Overseas, the film took in $22.3 million on Monday to bring its total to $253 million. The U.K. has been the film’s biggest market with $41.7 million, followed by Germany with $25.4 million, and France with $20.7 million. The film will be released in China on Jan. 5.

Despite not being released in China, “The Last Jedi” posted the fifth highest global opening of all-time, sitting behind “The Fate of the Furious” ($541 million), “The Force Awakens” ($529 million), “Jurassic World” ($525 million), and “Harry Potter and the Deathly Hallows, Part 2” ($483 million). The film is expected to cross the $1 billion mark worldwide by the end of its third weekend. “The Force Awakens” hit that milestone after 12 days in theaters, a box office record.

“The Last Jedi” is expected to easily stay No. 1 at the box office over Christmas weekend with a second weekend total of over $100 million despite over half a dozen new films entering theaters in wide and limited release, with each of the major Hollywood studios aside from Disney entering a new film into cinemas. Sony’s “Jumanji: Welcome To The Jungle” and Fox’s “The Greatest Showman” will enter on Wednesday, followed by Universal’s “Pitch Perfect 3,” Warner Bros.’ “Father Figures,” and Paramount’s “Downsizing” on Friday.