Warning: There are some serious spoilers ahead from “Star Wars: The Last Jedi.”

Leading up to the release of the eighth installment of the “Star Wars” series, fans were busy theorizing Snoke (Andy Serkis)’s origin and motivation. But as you saw in the movie — there’s not much time for the villianous character to develop, because, welp (spoiler!) he gets killed.

Kylo Ren (Adam Driver) slices Snoke in half with his lightsaber in a pivotal scene where Kylo and Rey (Daisy Ridley) show off some serious fighting skills. The killing of Snoke comes before Kylo urges Rey to join forces with him. She refuses, and Kylo is left to be the new evil supreme leader, a point that director Rian Johnson says ups the stakes for the next film in the trilogy and deepens Kylo’s seat as a villain.

“When I was working on the character of Kylo, I came to a place where I thought the most interesting thing would be to knock the shaky foundation out from under him at the beginning of this movie,” the writer-director said in an interview with Entertainment Weekly.

Also Read: Did You Catch This Fan Favorite 'Star Wars' Character's Death in 'The Last Jedi'?

“By the end of this film, he’s gone from being a wannabe Vader to someone who is standing on his own feet as a complex villain taking the reins,” Johnson said. 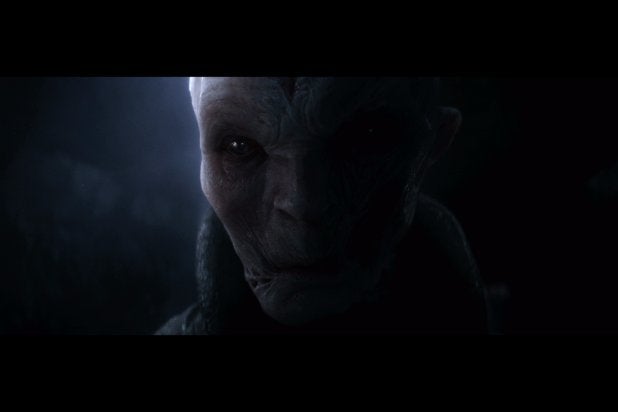 Johnson added that as he was setting up the story for the next movie, he wondered where Snoke would fit in.

“That made me realize the most interesting thing would be to eliminate that dynamic between the ‘emperor’ and pupil, so that all bets are off going into the next one,” he said. “That also led to the possibility of this dramatic turn in the middle, which could also be a really powerful connection point between Kylo and Rey.”

Johnson said he does find fan theories about Snoke’s backstory “interesting,” but the villain’s backstory just doesn’t matter to Rey.

“I never want to poo-poo the fans coming up with theories. It’s part of the fun of being a ‘Star Wars’ fan. If there is a place for it in another story, I hope it gets told,” Johnson said. But revealing that in “The Last Jedi” would have “stopped any of these scenes dead cold if he had stopped and given a 30-second speech about how he’s Darth Plagueis,” he argued. “It doesn’t matter to Rey. If he had done that, Rey would have blinked and said, ‘Who?’ And the scene would have gone on,” he explained.

You can see “Star Wars: The Last Jedi” now in theaters.