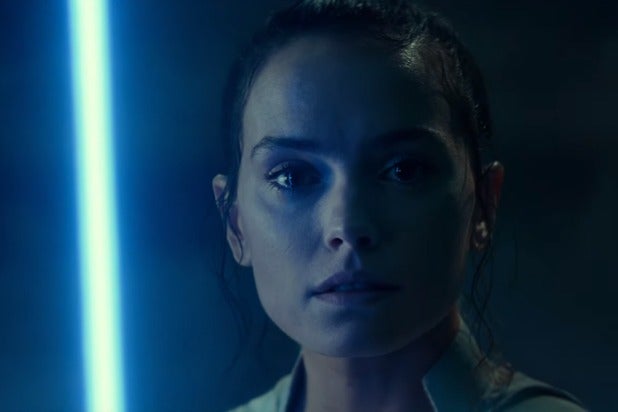 The first round of box office estimates for “Star Wars: The Rise of Skywalker” was released on Wednesday, with trackers estimating an opening of at least $175 million and as much as $200-210 million when it opens on December 20.

By comparison, Disney’s previous installments in their “Star Wars” trilogy each opened to well above $200 million. 2015’s “The Force Awakens” opened to a then-record $248 million while 2017’s “The Last Jedi” opened to $220 million, which today still ranks as the fourth-highest opening of all time.

As with all of their major releases, Disney has tried to keep expectations from getting out of control. 2019 has seen several films fall well short of tracker projections, particularly recent flops like “Doctor Sleep.”

Also Read: John Boyega Says He Was the One Who Left the Leaked 'Star Wars: The Rise of Skywalker' Script Under His Bed (Video)

Also, unlike the past “Star Wars” December releases, other studios are not steering their holiday releases clear of “Rise of Skywalker.”

Sony will be releasing “Jumanji: The Next Level,” the sequel to a film that grossed nearly $1 billion against “The Last Jedi,” one week before this film comes out. Universal’s musical “Cats” and Lionsgate’s Oscar contender “Bombshell” will also be released the same day as “Rise of Skywalker.”

But regardless of the unique factors, “Rise of Skywalker” will arguably be the most scrutinized release of the year. This is Disney’s first theatrical “Star Wars” release since “Solo: A Star Wars Story” bombed at the box office with just $392.9 million grossed worldwide, the lowest total ever for the 42-year franchise even without inflation adjustment. The disappointing figures led Disney to recalibrate their plans for “Star Wars,” with the next few projects in the franchise being developed for the Disney+ streaming service while the next theatrical release won’t come until 2022.

Over the last few years, “Star Wars” has stood as a strong No. 2 behind the insanely popular Marvel Studios on Disney’s depth chart of profitable IP. A $1 billion global total is virtually guaranteed for this film, but it will be interesting to see how a “Star Wars” film being sold as a finale over four decades in the making performs compared to Disney’s “Lion King” remake. Despite polarized reception, that CGI summer blockbuster had a $191 million opening and made a whopping $543 million domestic and $1.65 billion worldwide, the latter of which was higher than the $1.33 billion global total of “The Last Jedi.” What has a stronger hold over today’s audience: The Force or The Circle of Life?

Also Read: 'Star Wars: The Rise of Skywalker' Script Posted on eBay After Actor Left It Under a Bed, JJ Abrams Says

Set a year after “The Last Jedi,” “Star Wars: The Rise of Skywalker” sees the remnants of the Resistance attempt to gather their allies across the galaxy for one last strike at The First Order while Rey (Daisy Ridley), the last known Jedi, prepares for a final showdown with Kylo Ren (Adam Driver). John Boyega and Oscar Isaac also star, along with original “Star Wars” trilogy cast members Mark Hamill, Billy Dee Williams, Anthony Daniels, Ian McDiarmid, and the late Carrie Fisher in a posthumous role. “The Force Awakens” filmmaker J.J. Abrams returns to direct from a script he co-wrote with Chris Terrio.