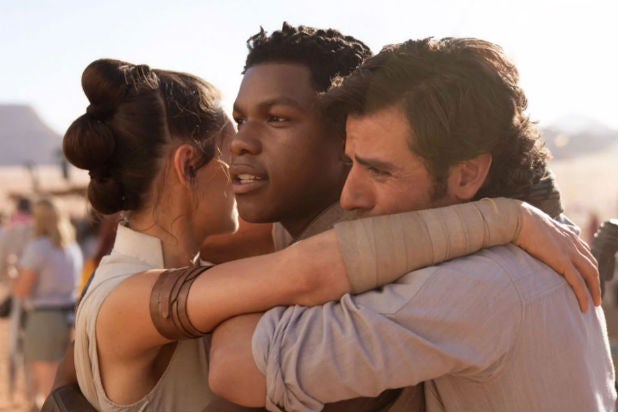 Midway through its fourth week in theaters, Disney/Lucasfilm’s “Star Wars: The Rise of Skywalker” is set to pass $1 billion in global box office grosses.

On Monday, the J.J. Abrams blockbuster added $4.3 million, including $1.1 million from domestic receipts. That gives the film a worldwide total of $996.5 million and sets it to pass $1 billion by Wednesday at the latest.

When it does, “Rise of Skywalker” will become the seventh 2019 release from Disney and the fourth “Star Wars” film since the studio’s $4 billion acquisition of Lucasfilm to hit that milestone. It is approximately $60 million shy of passing the global theatrical run of the anthology film “Rogue One: A Star Wars Story,” though it will finish short of the $1.33 billion total of its 2017 predecessor “Star Wars: The Last Jedi.”

Disney will not release another “Star Wars” film in theaters until 2022, a change in strategy from their original plans to release a franchise installment every year. Lucasfilm’s short-term plans involve projects for Disney+, including the hit series “The Mandalorian,” which will release its second season this fall, and a currently untitled series starring Ewan McGregor as Obi-Wan Kenobi.