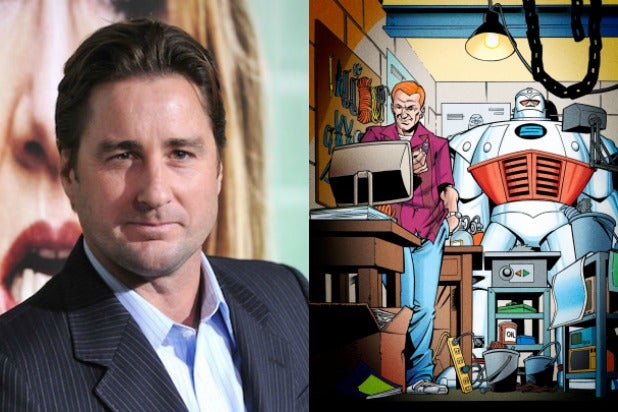 Luke Wilson has boarded DC Universe series “Stargirl” as Stripe pilot Pat Dugan. Stripe, by the way, is a 15-foot robot created by the mechanic-turned-superhero.

“Stargirl” centers on high school sophomore Courtney Whitmore (Brec Bassinger) who inspires an unlikely group of young heroes to stop the villains of the past. This new DC Universe series, slated to launch in 2019, reimagines Stargirl and the very first superhero team, the Justice Society of America.

The “Old School” alum plays Pat Dugan, who once went by the less-than-inspired superhero name of Stripesy, sidekick to a young hero known as The Star-Spangled Kid, and later, Starman of the legendary Justice Society of America. Today, Pat has left his sidekick life behind him. But when his new step-daughter, Courtney Whitmore, discovers Pat’s secret past and takes on Starman’s legacy to become Stargirl, Pat is forced to come out of retirement and once again become a sidekick — to his step-daughter — this time piloting a 15-foot robot called Stripe.

Wilson is the fifth announced casting for the series, along with Bassinger, Joel McHale as Starman, Lou Ferrigno Jr. as Rex Tyler/Hourman and Anjelika Washington in a “mystery role.” The live-action series for the DC’s digital subscription series is being written and executive produced by Geoff Johns and hails from Warner Bros. Television, Mad Ghost Productions and Berlanti Productions.

“When I first moved to Los Angeles in 1996 and saw ‘Bottle Rocket,’ I became a huge fan and admirer of Luke’s,” Johns said. “And I literally wrote this part for Luke, hoping that someday and somehow he’d play Pat Dugan. I only envisioned him. And now I feel like I won the lottery! Luke’s talent, humor, compassion — his presence and professionalism — and his creative collaboration, his ideas — we’re so lucky to have him alongside Brec in ‘Stargirl.'”

The original series is the sixth for DC Universe and focuses on the title character who kicked off Johns’ comic-book career in 1999. That print series was inspired by his late sister, who was killed in a 1996 plane explosion. “Stargirl” is part of a live-action slate that includes “Titans,” which has already been renewed for its second season, and the upcoming “Doom Patrol” and “Swamp Thing.”

Wilson can next be seen in John Crowley’s “The Goldfinch” and Atom Egoyan’s “Guest of Honour.” His previous film credits include “The Skeleton Twins,” “Meadowland,” “The Royal Tenenbaums” and “Bottle Rocket.”

He is repped by CAA.