Jenna Elfman, Anne Heche and Sarah Silverman all took advantage of Entertainment Weekly’s early delivery of their annual “Pre-Emmy” party to hit the Sunset Marquis bash during the last moments of pre-awards calm before the weekend storm. This year’s EW fete, partnered with Women in Film’s new TV and Media Committee, again proved to be the Emmys analog to the “Vanity Fair Party” in terms of star power. At that point in the week on Thursday night, “everyone is still a winner." 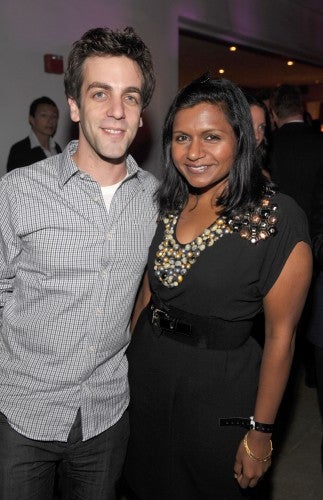 Right around the point that viewers were watching the credits roll on Thursday’s season premiere of “The Office," show’s star/producer B.J. Novak was fighting through the crowd at the magazine’s party to chase down water for on-screen girlfriend Mindy Kaling (pictured at left; photo courtesy John Shearer, Wireimage), as Office co-worker Kate Flannery chatted with nominee Gabriel Byrne nearby. Tiny dancer Karina Smirnoff (“Dancing With the Stars”) flexed her agility, squeezing in and out of the bar crowd much faster.
George Lopez (arriving from the ALMA awards) shared a private chat with Sharon Stone in the patio’s corner by the palm trees, just a few breaths away from the smoking section, where “Entourage’s” Rex Lee and “Mad Men’s” Rich Sommer bonded over their respective shows’ Sunday night battle on the cable schedule.
As Elizabeth Banks waited patiently to walk the packed purple carpet, she spied “24’s” Madame President, Cherry Jones.  Giving up her place in line, Banks ran over for a “fan moment” with Jones, sticking out her hand and introducing herself with  “I’m a huge fan of yours" (stepping in on a conversation with WME’s Scott Henderson).
Another “fan moment” came earlier in the day at one of the gifting suites that covered every zip code between the 10 freeway and Mulholland this week. Outside “Kari Feinstein’s Style Lounge," Joely Fisher caught sight of “Grey Gardens” director/writer Mike Sucsy while loading goodies like GNC women’s products and the much sought after gift certificates for dinners, champagne bottles, and “rounds of shots” from steakhouse fave STK.  Fisher, approaching to set a future meet-up, told Sucsy, “I’m obsessed (with the movie) … like, in a good way," (The Academy is apparently obsessed too — HBO’s Drew Barrymore / Jessica Lange starrer is up for 17 awards this season, tied for the most ever.) Indoors, real life buddies Adrien Grenier and Kevin Connolly browsed the suite benefitting the American Cancer Society, a common philanthropic theme. 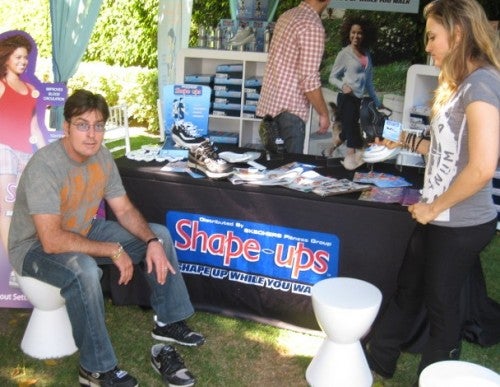 Meanwhile, up in the exclusive (and gated) Beverly Park neighborhood, nominee Charlie Sheen (photo courtesy Rebo McFadden, Sketchers.com) put on a whole new uniform to “go gifting” at the Silver Spoon’s celebration in honor of the cancer focused Noreen Fraser Foundation. Sheen changed shirts at the threshold, donning a sponsor’s Wet Cement T-shirt, which quickly became the default uniform for many of the boldfacers sampling a buffet of gifts while making donations  to the cause. Nominee Dave Kushner, one half of the guitars with bandmate Slash in Velvet Revolver, took the costume change one step further, putting on his dancing shoes for the guitar hero-esque “Just Dance” Wii game room.
Savvy marketers blanketed nominees and presenters with antidotes to any and all pre-awards neuroses: President Barack Obama’s signature $375 Jorg Gray watch were handed over in pairs for couples who might run late to the show at Monday’s Secret Room event at the posh SLS hotel, “Fake Bake” instant tanning lotions were squeezed poolside at the Skybar’s suite (for stars like Annalynne McCord and Sean Faris), and if feeling good is as important as looking good, stars like Malin Ackerman stashed away Cuca Fresca Cachaca (Brazilian liquor) in their swag bags at the Eco-Emmys suite on Friday to prepare for the weekend.
More party and event coverage to come from the red carpets this weekend.