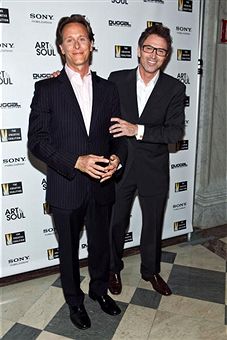 The Creative Coalition on Thursday kicked off a weekend of Washington festivities tied to the White House Correspondents Association dinner, hosting a star-studded tribute to the Library of Congress Thursday night.

As they highlighted the development of TV from the late 1940s in one segment, Hines asked Weber whether it was really possible to fill a 24-hour news channel with news.

“No,” responded Weber. He then noted that a 24-hour news channel started in 1996, a time, he said, “when Congress actually passed laws.”

Lee who presented a Creative Coalition Spotlight Award to Dr. James H. Billington, the 13th Librarian of Congress, said that besides his background as a Librarian, Billington was a Philadelphia Phillies fan.

The tribute was written by "Oz" and "Homicide: Life on the Street's" Tom Fontana.Billington was honored for the work the Library has done to gather and preserve historic recordings, films and TV shows.

Friday the artists are to make a series of Capitol Hill appearances and also stop in at the White House.