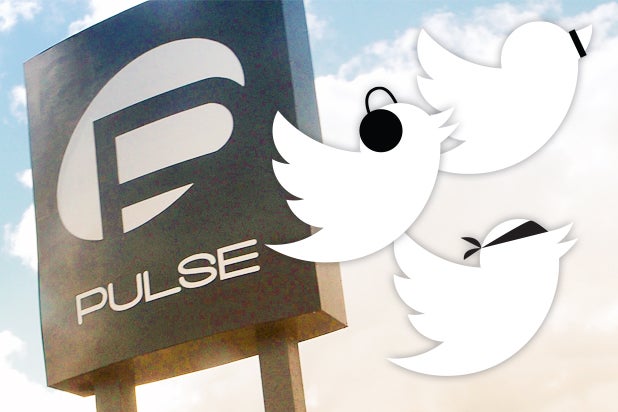 Some gay activists feel slighted by stars who offered their love and support on Twitter after mass killings in Sandy Hook, San Bernardino, Paris and Brussels — but not after the Orlando shooting.

“Silence speaks volumes,” gay advocate Danielle Moodie-Mills, who consulted for GLAAD, told TheWrap. “Why is it OK to tweet something about National Yoga Day but not about this?”

— none of whom responded fast enough, he says. The issue is whether stars were less demonstrative with their support because the victims were LGBT.

“F–k that bullshit!” Hilton said during a recent podcast. “I am judging them.”

Many find it distasteful to make an issue of celebrity tweets as the country fights over gun control and mourns the loss of 49 people killed by Omar Mateen.

Asked about criticism that  tweeted about her upcoming tour, but has yet to mention the Orlando shooting on any of her social media platforms, a publicist for the star told TheWrap: “I am honestly hoping that you’re NOT trying to take this tragedy and write a story about howhasn’t tweeted‎ about it. I’m honestly going to pretend you didn’t write this email.”

And AIDS activist Peter Staley, who was featured in the 2012 Oscar-nominated documentary “How to Survive a Plague,” told TheWrap he has bigger things to worry about than what stars say online.

“I don’t really follow the celebrity world. it’s not my thing,” he said. “The activism that has been pouring out since the massacre has been substantial and real, and I’m not sure I care that much what various celebrities tweet or don’t tweet.”

“Anyone wondering if celebrities really wield any true influence should ask why major brands continuously pay them upwards of $10,000 for a single tweet,” Kawalec told TheWrap. “Their millions of fans ‘follow’ them — both literally and figuratively.They are referred to as ‘influencers’ in the marketing world for a reason.”

Kawalec, who is gay, said he didn’t understand why someone wouldn’t tweet messages of Orlando support. “I don’t mean this as a dig, but it’s hard to justify saying nothing when it costs nothing to say something,” he said.

Hilton said in an email to TheWrap: “It was glaring as the days went on who DIDN’T say something. I think EVERYONE — celebrity or civilian — has a responsibility to speak on events that shift the cultural landscape in such a massive and awful way, like the tragedy in Orlando. ESPECIALLY if you’re a celebrity who is often on social media and even more often trying to promote themselves and their products. If you don’t speak out, you’re siding with the culprits! Silence is deafening! Sadly, a lot of celebrities are cowards. But, what happened last week is not about politics or sexuality. It’s about humanity! And not speaking on it shows a great lack of humanity.”

In some cases, stars who were silent on Orlando nonetheless tweeted about their products and projects. Adding to the activists’ frustration is that so many celebrities who didn’t comment on Orlando did express support after previous mass killings.

For example, when gunmen stormed the Bataclan concert hall in Paris in November, killing 130 people, Hollywood’s biggest names took to social media to show their solidarity and send their prayers to the French capital.

Swift posted a picture of herself standing on a bridge with the caption: “Praying for Paris. Our hearts are breaking for and with you.” The Instagram post got more than 2 million likes and 24,000 comments.  posted a picture of the Eiffel Tower to his more than 22 million followers. And Justin Beiber posted a heartfelt message to his more than 80 million Twitter fans, saying, “Thoughts and prayers with everyone #PrayForParis.”

also tweeted her support to the victims of the Brussels bombing, telling her more than 60 million fans, “Praying for all those who’ve been affected by acts of terror across the globe, most recent being in Brussels… Heart breaking!”

But none of the above stars spoke out about Orlando immediately after the shooting. When Swift eventually did offer support, the Huffington Post noted that she honored Orlando “after nearly a week of silence.”

Bieber tweeted about Orlando four days following the attack — only after Perez Hilton and fans complained about his lack of a response.

For all those asking no I won't cancel the Orlando show. I stand with Orlando in support. Love you Orlando! #OrlandoStrong

Minaj was slammed for dropping a new track while ignoring the massacre, and a fan accused her of blocking him after he complained about it. (Reps for Minaj and did not respond to TheWrap’s requests for comment).

Some activists say they don’t want to nit-pick who tweets what, but do want those with great platforms to use them for good.

“There are two things that move society: pop culture and politics,” said Moodie-Mills. “And pop culture can reach people in a way that politics can’t. When a star says, ‘This is important to me,’ it matters.”

“Celebrities can reach more people with one tweet than some major publications,” said Anthony Shop, co-founder of Social Driver, a digital and social media strategy agency.

Many Hollywood celebrities responded to Orlando quickly and wholeheartedly. tweeted no less than 23 messages related to Orlando and changed her cover picture to a rainbow flag. followed her tweets with a heartfelt speech demanding justice for LGBT people. Beyonce closed the first leg of her “Formation World Tour” by dedicating her hit song, “Halo,” to the Orlando victims.

And Broadway’s biggest names sang, “What The World Needs Now Is Love,” in honor of the victims. The performers included

“The entertainment community is always the first to jump behind the LGBT community,” publicist Simon Halls told TheWrap. “It’s tricky and dangerous to judge people based on their Twitter feed.”

One reason the issue is so difficult, says prominent gay activist Cleve Jones, is that the Orlando shooting “didn’t fit into a simple convenient narrative.”

It isn’t about one issue, but rather a perfect storm of many extremely complex ones. The growing list of issues the Orlando attack evokes includes homophobia, race, terrorism, gun control and mental illness. Some celebrities may be understandably hesitant to stake out positions that may change as more facts emerge.

The issues are so sensitive that even one celebrity who tried to show support for victims was criticized. After turned up at a New York City vigil for the Orlando victims, a gay Huffington Post writer said he seemed a little too eager in an article titled: “Dear , There’s a Way To Be A Straight Ally. That Wasn’t It.”

The article criticized the singer for taking “up space” and infringing on the gay community’s moment of grief. Many readers disagreed with it.

Kawalec says social media teams that work for A-list stars will have to take a hard look at their practices after Orlando. The first lesson is not to try to move units during a national tragedy.

“Whenever there was any kind of negative world event, we immediately stopped any advertising for any of our major brands,” Kawalec said. “The last thing you want is to seem like you’re still busy trying to make a buck while people are crying.”

Rasha Ali and Michael Monaghan contributed to this report.