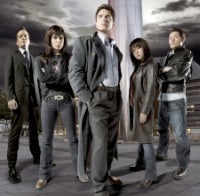 Starz has grabbed up the U.S. rights to the next season of the cult U.K. sci-fi series "Torchwood."

New episodes of the "Doctor Who" spinoff, previously shown in the U.S. on BBC America, will start airing on Starz next summer.

The network announced the deal on Monday in a joint statement from president-CEO Chris Albrecht and BBC Worldwide Productions’ executive VP Jane Tranter.

The show, about a team of government operatives tasked with monitoring a rift in the space-time continuum, is co-produced by Starz, BBC Cymru Wales and BBC Worldwide, which will distribute the show outside of the U.S.

The key members of the cast, including John Barrowman and Eve Myles, will return for the 10-episode season.

Since taking the helm of Starz in January, Albrecht has shown a predilection for signing up shows from across the Pond. His first series order was the medieval drama "Camelot," produced by Graham King’s GK Films. The network also will be showing the eight-episode Canada/Germany co-production of "The Pillars of the Earth" this summer.