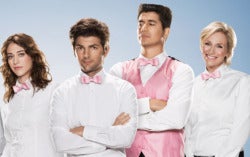 Low-rated "Party Down" and "Gravity" are being shown the door by Starz.

The recent season finales of both series posted 0.0 ratings in the key adults 18-49 demographic on June 25.

"Party Down" was a dry comedy about a group of waiters at a catering service, created by a team of writers including actor Paul Rudd, Jon Enborn, Rob Thomas and Dan Etheridge.

It's also been troubled by cast changes. The first two seasons featured Jane Lynch, before she was gobbled up by "Glee." She was replaced by Megan Mullaly of "Will & Grace."

Though it was never a ratings success, it did enjoy positive critical buzz and built something of a loyal cult following.

"Gravity," on the other hand, never caught on.

Premiering on April 23, the series dealt with the exploits of the patients in a support group for suicide survivors. It starred Ving Rames, Krysten Ritter and Ivan Sergei.

Stephan Shelanski, executive vice president of programming for Starz, said the decision not to continue airing the shows was made "after careful consideration … We’re grateful to everyone involved in the shows, and are proud to have had them on the channel. Starz remains committed to aggressively expanding our original programming lineup."