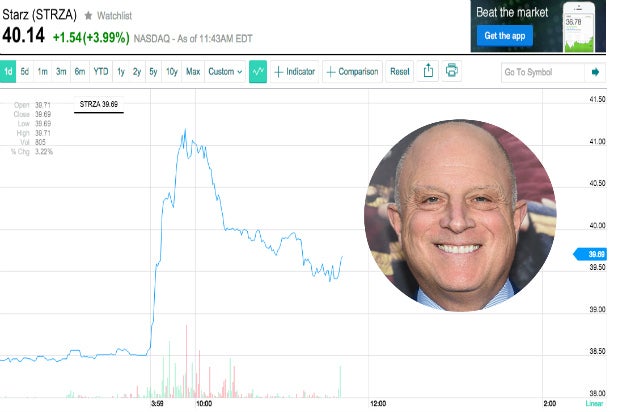 Starz stock rose swiftly to an all-time high within the first half hour of trading on Thursday, thanks to better-than-expected first quarter earnings results.

Not only did Starz top Wall Street’s expectations with both its reported Q1 revenue and earnings per share, the company’s main network grew its subscriber base once more to an all-time internal high of 23.7 million subscribers. Per most recent numbers, Starz is ahead of Showtime for second-place among premium pay-TV cable channels, trailing only HBO.

The generally good early-morning news translated to stock growth, as shares of STRZA hit a new top mark of $41.22 apiece. The stock closed Wednesday at $38.60 per share, and crossed the $40 mark for the first time ever within 10 minutes of Thursday trading.

With the stock market, of course, what goes up, tends to come down. In STRZA’s case, that has happened almost as quickly as it rose. At the time of this writing, the stock was trading for $40.14 per share, which is still obviously up from the previous day, but maybe more down-to-Earth than CEO Chris Albrecht and company would probably hope to see heading into the day’s investor event.

Starz’s conference call is set for 1 p.m. ET today, after which there could be additional market fluctuation over the remaining hours of the U.S. trading day.

The company boasted earnings per share of $0.79 on $450.7 million in revenue for its most recent three-month period.