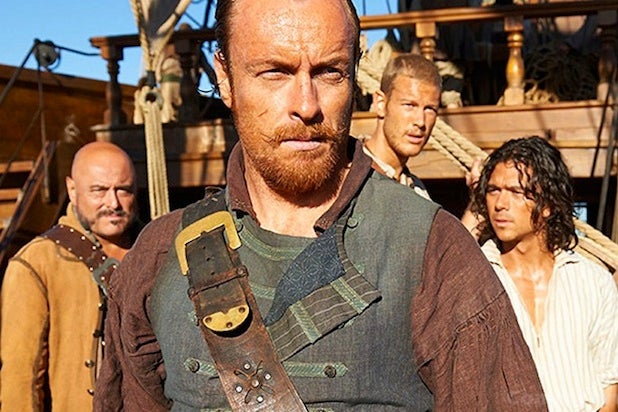 For those looking for a lot of swashbuckling on Starz’s new drama “Black Sails,” there could be a certain level of disappointment.

Yes, the series’ premiere episode begins with a harrowing takeover of a ship, cannons firing, swordfights and all that one would expect from a series about pirates, the pace and setting changes very quickly after that.

“It was deliberate,” co-creator Jonathan E. Steinberg told TheWrap. “We try not to use that word, ‘Pirates.'”

He continued, “That word is so freighted, it’s so much cartoon, so much cliché that at the end of the day you almost have to put it in a box and tell a story about people who lived on this frontier and in this colony that was lawless and they survived by stealing and by raiding merchant ships, and start to build it from all of its constituent pieces before you apply that labeling.”

In its eight-episode first season, “Black Sails,” which is executive produced by Michael Bay along with his Platinum Dunes partners Brad Fuller and Andrew Form, follows Captain Flint (played by “Die Another Day” actor Toby Stephens) and takes place 20 years prior to the events in the Robert Louis Stephenson pirate classic, “Treasure Island.”

After the big battle scene, the first episode quickly transitions into a possible coup among the crew in a bid to replace Captain Flint – not by force as one would expect but by election. But, the producers caution against viewers seeing the coup as an organized activity.

“To say it’s democratic is almost to romanticize it,” Steinberg said. “They’re a mob. There is a sense in some of the literature to try to romanticize it and make it about this sort of democratic experiment and this idea that they had figured something out. It is messy, it is frequently counterproductive. We wanted to get across that, yes, they vote, but a lot of times it might not lead to the right end.”

The factions on the crew may be surprising racially diverse for the time period, as well, but the producers explain that too is a function of the pirate culture and not a result of anachronistic beliefs on race.

“It runs in so many different directions, we want it to be able to tell a story, which we do later in the first season, about the taking of a slave ship,” Levine explained.

“This isn’t a universe in which they are all free, because everyone’s equal,” he continued. “This is a universe in which those who can help us are now freed, you’re a part of our crew, because you can help us. The rest of you who can’t help us are worth more as cargo, so you are still slaves. That feels real, that feels dark and it feels awful but it feels real. And I think that’s how we wanted this to operate.”

And, of course, one would expect a pirate series to portray death often. But, how does it do that with surprise and weight when it’s the prequel to a novel that features some of the same characters?

“We live in a ‘post-Shield,’ ‘post-Game of Thrones’ world where that’s been done in such a fantastic way that to do it really has to live up to that level,” Steinberg said of killing characters. “It not only has to be completely shocking and tragic but also yield more story. It has to do that or it’s going to feel cheap.”

Levine conceded, “If they’re in the book they get a bit of a pass. Everybody else…”

“They’re still going to have a hard time with it,” Steinberg interjected.

Find out which characters “Black Sails” plucked from fiction and history books in the featurette below: