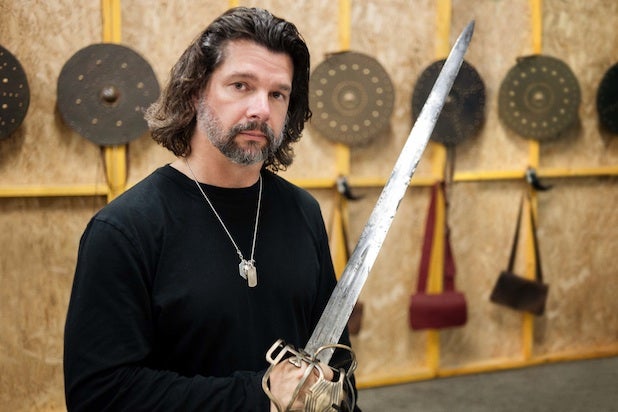 Producer Ronald D. Moore is no stranger to fervent fandoms after working on both the “Star Trek” and “Battlestar Galactica” franchises.

Now, he has adapted Diana Gabaldon‘s “Outlander” series for Starz. It’s an epic time traveling romance that seems to resist being pigeonholed into one category. And its fandom is large, vocal and active.

“I was a fan, so I get it,” Moore said of the pressure of pleasing fans. “You try not to worry about it too much. You have to trust your own instinct as you’re telling a story. Starz told us from the beginning to make the show for the fans. So from the very beginning, I wanted to do a faithful adaptation and to do something that was true to the material, deliver this story to a lot of people who already love it and everyone else who joined in would be swept along with everyone else. With that in mind, we just tried our best to deliver on that.”

Fans have already delivered signs that the series will do well. They came in droves to Starz’s spectacular premiere and screening during San Diego Comic-Con. They also drove the pilot viewings during Starz’s one week preview of the show to nearly one million samples.

“Outlander” follows Claire (Caitriona Balfe), a married combat nurse from 1945 who is mysteriously swept back in time to 1743. In the past, her life is threatened and she’s forced to marry Jamie Fraser (Sam Heughan), a chivalrous and romantic young Scottish warrior. As a result, Claire becomes torn between her two lives.

TheWrap: What drew you to sign on for “Outlander”?
Ronald D. Moore: The book was a page-turner. I was attracted to the central character. I really liked Claire on the page. She was smart, she was strong and she goes into the 18th century and doesn’t start asking for a telephone or something stupid like that. I like history and historical fiction. There’s a lot of texture and detail to that world. It had authenticity to it. And it was just a great yarn; things kept surprising me that I didn’t expect to happen. And by the time I got to the first book, I thought, ‘Yeah, this is a show. I could see where the season is.’ And there’s seven more at that point, so you can keep going.

Do you worry about disappointing the books’ fans?
You’re not going to be able to please everybody. I’m sure once it comes out there will be an element of the fandom who hate it, who think we’ve destroyed something they love, and people who think it’s the greatest thing they’ve ever seen. We’ll see where the majority falls. You do your best and hope the people you present it to will enjoy it. And, you’re not turning it over to the fans and what they think should be included from the book. You have your own gut and trust your own artistic judgments as you go along.

Do you worry that men will be turned off by the idea that this is a series based on romance novels?
One of the challenges that the books have always had was where they get categorized. Diana would talk about how a lot of booksellers didn’t know where to put it. It kept getting placed in the romance section. It’s not really a romance. It’s more of an adventure series. It’s historical fiction, it’s got romance in it, it’s got time travel. It is a hard-to-categorize piece, but it’s more of an epic adventure of this woman’s journey more than really a classic romance.

How do you pace Claire and Jamie’s romance in the series?
The romance that occurs between Claire and Jamie is really a slow boil for a while. It’s not like they meet and it’s all about this heat. We don’t play that at all. There’s chemistry and something there, but she’s trying to get home. It’s not about having a romance with this guy. The love story that does develop is unexpected. They’re actually forced to marry before they’re even in love, which is really interesting. Now, she’s caught in a triangle where she’s married to a man in the 20th century and married to a man in the past but trying to get home and she can’t tell him who she really is. It’s an interesting dilemma.

What was the biggest challenge of the production?
The logistics of the production. It’s complicated. It’s a big piece. It’s not just all based at a castle. She goes to a castle for a few episodes and leaves and the story goes with her. In the second book, she goes to Paris and then goes to Jamaica and on to The New World. From a strictly production sense, that’s a challenge to pull off.

A lot of the economics of television is built around standing sets. So, the fact that it was a book gives us a leg up, because we knew we were putting those pieces together, doing it in the United Kingdom, the writing staff was here. I think I didn’t realize how wearing the travel was going to be, back and forth commuting was a bigger deal than commuting to Vancouver, which is what I used to do. Laying out the story was actually easier and much more fun. It wasn’t nearly as difficult as the physical production of it.