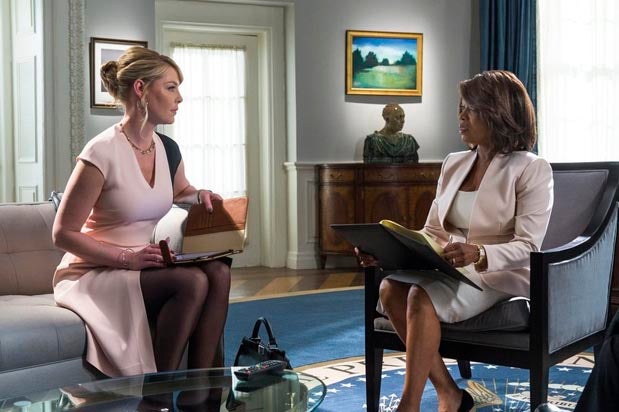 “State of Affairs” is so ludicrous it’s impossible to take seriously.

The biggest problem, sad to say, is star Katherine Heigl, who’s making a high profile return to series television with NBC’s new espionage drama. The former “Grey’s Anatomy” star can be appealing in the right role, but is completely wrong as Charleston “Charlie” Tucker.

Supposedly a top CIA analyst, Heigl’s character looks like she’s wandered off the set of the actress’s many rom-com movies, her hair pulled back just so as she navigates government corridors at all hours in impossibly high heels. Her Charlie spits out jargon with the best of them, but isn’t very convincing as a savvy political operator.

The show, developed by Joe Carnahan and executive produced by Heigl and her mother, plays like a cross between “Homeland” and “Scandal,” minus the juicy intrigue and femme intellect. Say what you will about Carrie Mathison and Olivia Pope’s romantic choices, but at least those characters, as portrayed by Claire Danes and Kerry Washington, seem believably powerful and capable of navigating tricky situations. Not so for Heigl’s Charlie.

There are moments in the reshot pilot that play to the actress’s strengths and suggest a complexity that may be developed in subsequent episodes, but overall the enterprise is regrettably conceived. The writing does no one any favors, failing even to make the most of Alfre Woodard as president. At the very least, Heigl’s costumer deserves a sharp reprimand.

The action begins with a flashback to a shootout in Afghanistan a year prior. Our very first hint that we may be in for trouble with the show comes with a shot of a woman’s pointy shoes amid repeated cuts to Heigl’s character shaking her head in agony. This is where we learn that Charlie’s fiancé, Aaron, was a doctor who died on a humanitarian mission. Charlie’s therapist insists she’s repressing a key part of her memory and engaging in reckless behavior; the president’s special briefer isn’t about to change her ways.

However, she’s not quite as sanguine when the CIA discovers that another American humanitarian doctor who looks like her dead African-American love has been captured, and terrorists are threatening to kill him if their demands aren’t met.

This news sets off a chain reaction, threatening a covert operation to kill a key enemy on the anniversary of Aaron’s death. Did we mention that Aaron was the president’s son? Well, he was.

Dr. Butler’s capture ramps up the urgency as the CIA analysts race to put together the daily briefing on the nation’s top threats. That sense of urgency is one of the best things about “State of Affairs,” along with its distinctive portrayal of briefing process and certain aspects of government protocol. We see ripped-up notes being stapled into paper bags and stuffed down a burn chute as the report is being prepared for the president, for instance, plus the hand delivery to the president.

Cell phones are omnipresent, with communication rapidly careening around Washington and the globe. Those are all things we’ve come to expect from espionage dramas, and “State of Affairs” delivers.

Charlie interferes with a major covert operation and decides to omit key information from the president, aka the woman who would have been her mother in law had Aaron not been killed. The acting head of the CIA, meanwhile, seems strangely oblivious to a Syrian envoy of dubious motive, paving the way for cat and mouse behavior between Charlie and her boss.

The show plays the bond between Charlie and the president awkwardly. Woodard, a fine actress, is reduced to telling Heigl’s Charlie that “his death will make killers out of both of us.” As awkward as these moments between the women are, they do give Heigl a chance to display her warmth and vulnerability, two of the traits she nicely brought to bear in “Grey’s Anatomy.”

Carnahan directed and co-wrote the first episode, which includes other groan-inducing remarks, as when Charlie makes an off-color remark to her therapist about sexual satisfaction, and the president’s chief of staff shouts out to Charlie, “You don’t set policy, the president does.”

The show does end on a promising note with a visit from one of Charlie’s old colleagues from the field; that could lead to more intriguing developments in the future. Charlie, it turns out, is highly compromised and just as capable of rationalizing her behavior as Carrie Mathison and Olivia Pope.

But Heigl, and the show, both have to step up their game considerably if they want to operate convincingly at the same level as TV’s most successful espionage dramas or even its passable ones. After the first episode, the state of affairs for this new program is very dire indeed.

“State of Affairs” premieres Monday at 10 p.m. ET on NBC.