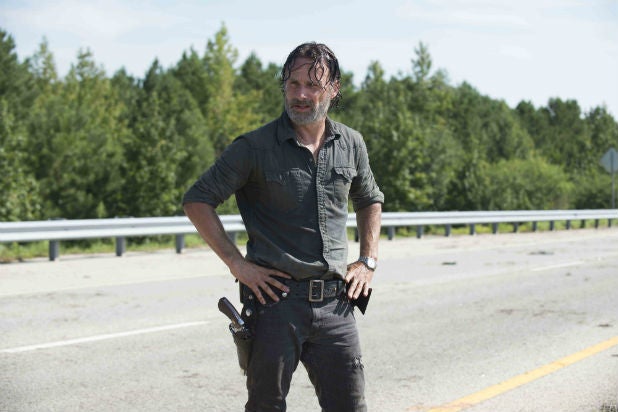 It’s been a tough year for “Walking Dead” fans.

On “The Walking Dead” this season, we said goodbye to Carl Grimes (Chandler Riggs), the optimistic son of leading man Andrew Lincoln’s Rick Grimes — and now it’s been reported that Lincoln will be exiting the zombie drama in Season 9. There’s also speculation that Lincoln’s co-star Lauren Cohan, who plays Hilltop leader Maggie, won’t last past Season 9 either, as she’s only confirmed thus far for six episodes and has a new show, “Whiskey Cavalier,” opposite Scott Foley on ABC.

It hasn’t been much better for fan-favorite characters in spinoff “Fear the Walking Dead” this season, either. Frank Dillane asked to be written out of the show, resulting in Nick’s death earlier in Season 4. And on Sunday’s midseason finale, star Kim Dickens’ character Madison Clark — who, like Carl, was a champion of finding more to life than simply survival in the zombie apocalypse and, like Rick, has been her group’s leader since Season 1 — died in a fiery self-sacrifice so that her children could live on.

The shakeups have gone beyond the casts.

Earlier this year, Gimple was promoted from “Walking Dead” showrunner to “Dead” universe chief content officer, withwriter and co-executive producer Angela Kang taking over as showrunner. The “Fear” team also saw some changes ahead of Season 4, with the duo of Andrew Chambliss and Ian Goldberg taking over as showrunners from Dave Erickson. Gimple also signed on as an executive producer.

“TWD” Season 8 sunk 28 percent in total viewers per-episode from Season 7, and an even-scarier 34 percent in the advertiser-coveted adults 18-49 demographic. That’s bad — but there is some silver lining here: Counting one week’s worth of delayed viewing, each hour of “The Walking Dead” is still drawing a big 11.813 million total viewers, with 6.824 million coming from that main demo (“Dead” boss Scott Gimple told TheWrap back in April that “ratings across television have gone down. And that people are watching TV in a lot of different ways” when asked about the drama’s dip).

So yeah, it’s down, but definitely not out. Plus, the shakeups and ratings dips haven’t seemed to hurt AMC overall, as the network reported better-than-expected first-quarter 2018 financials last month.

Compare those “Walking Dead” averages with the first half of the “Fear” season’s viewership and maybe you’ll get a better idea of just how big the franchise’s flagship series is.

The ongoing Season 4 of “Fear the Walking Dead” has averaged 4.420 million total viewers, with about half of them (2.203 million, to be exact) in the demo. That’s less than one-third of “The Walking Dead’s” demo ratings from the season that recently wrapped.

And those seemingly low “Fear” numbers are are up. Comparing the first six episodes Season 4a — what we call the first half of a split season — with the end of Season 3 (so yes, 3b), “Fear” has jumped 22 percent overall and 19 percent in the demo, according to Nielsen.

Season 4 of “Fear” has acted as a special crossover event for the “Dead” universe, tying the two shows closer together when Lennie James joined the “Fear” cast. James, whose character Morgan has been in the show since the first episode, was able to incite excitement around the spinoff that traditionally saw less buzz than its predecessor. Several all-new characters — played by Garrett Dillahunt, Jenna Elfman and Maggie Grace — also injected new life into the series.

While a fifth season of “Fear” has yet to be announced, showrunners Goldberg and Chambliss are looking forward to expanding the story of the apocalypse.

“We have a definite idea of where these characters can go and where their journeys can take them beyond this season,” Chambliss told TheWrap.

Though it’s hard to imagine “The Walking Dead” without its leading man –especially when Rick (and Carl, and Maggie) are still very much part of the story in the source material — Gimple said last year that the show could last 20 years.

“We are trying to do 20 years. The [“Walking Dead”] comic has certainly done it, and I look forward to every issue,” he said at PaleyFest in Los Angeles last March. “We want to try do it better, do things we haven’t done, take risks. It’s scary as hell, but as long as we keep doing that the show can go on and on.”

On and on… just like the comic books, which are currently on issue 180.

Author Robert Kirkman has said while he knows the ultimate ending, the grand finale to the apocalypse won’t happen any time soon.

“I definitely do have an endgame,” he said during a Q&A panel on the Walker Stalker Cruise in February. “Even though I do know what the end is and I am working toward it, it is very far off and that’s not something that’s going to be happening anytime soon so there’s no cause for worry. Plan on going for a good long time but I do know exactly what I’m working toward, which is important to me.”

While it may not be the I.P.’s televised heyday, much like the zombies in Kirkman’s blockbuster TV adaptations, “The Walking Dead” is anything but dead — and there’s no reason to bury it anytime soon.