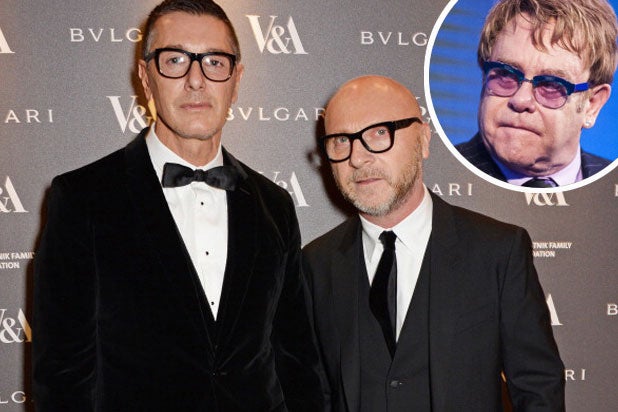 Stefano Gabbana has fired back at Elton John, after the “Rocket Man” singer called for a boycott of the designer’s Dolce & Gabbana label.

“He’s ignorant,” the designer told Italian newspaper Corriere Della Sera in a story published Monday, adding, “he denies ways of seeing things that may not be his but are just as deserving of respect.”

John called for a boycott of the label Saturday due to statements that Gabbana and his business partner, Domenico Dolce, made about same sex parents and in vitro fertilization in a joint interview with the Italian publication Panorama.

“You are born to a mother and a father. Or at least that’s how it should be,” the openly gay designing duo told Panorama. “I call children of chemistry, synthetic children. Rented wombs, semen chosen from a catalog.”

After John blasted their comments, Gabbana noted in Monday’s interview that he previously regarded the musician as bright, but that has apparently changed.

“What’s going on? You preach understanding. You preach tolerance. And then you put the knife in?” the designer added of John. “All because someone else doesn’t see things your way? Is that supposed to be a democratic way of thinking?”

John, who has two children via a surrogate with his partner David Furnish, set off a social media firestorm over the weekend when he lashed out at Dolce and Gabbana in an Instagram post.

“How dare you? refer to my beautiful children as ‘synthetic,’” he fumed. “And shame on you for wagging your judgmental little fingers at IVF – a miracle that has allowed legions of loving people, both straight and gay, to fulfill their dream of having children.”

Gabbana added that he wasn’t exactly sweating the effects of John’s boycott.

“We might lose one or two fans, or gain one or two mums,” Gabbana told the newspaper. “Who knows.”