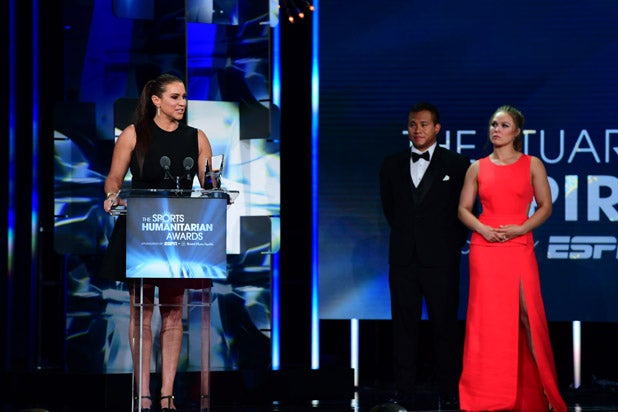 The Third Annual ESPN Sports Humanitarian Awards on Tuesday once celebrated again the positive things that athletes do rather than the negative things that so often end up in the news.

From the NFL, NBA and MLS to WWE, UFC and boxing, sports stars from across the country joined in honoring those who try to make the world a better place.

Laila Ali co-hosted this year with “Mike & Mike’s” Mike Greenberg, and they both got to witness the presentation of the first Muhammad Ali Sports Humanitarian Award in remembrance of her late father, who paved the way for athletes wanting to make an impact on the community. Presented by ESPN and sponsored by Bristol-Myers Squibb Company, the event gathered leagues, teams, individuals and members of the sporting community in Los Angeles at L.A. LIVE’s The Novo to celebrate those who have used the power of sports to make a positive impact on society.

Also Read: Laila Ali Talks Muhammad Ali Ahead of ESPN Humanitarian Awards: 'He Is in a Better Place Now'

After a media circus across the street Tuesday afternoon at the Floyd Mayweather and Conor McGregor press conference, UFC fighter Ronda Rousey was on hand to present a very special award to WWE Chief Brand Officer Stephanie McMahon — one of the three recipients of the Stuart Scott ENSPIRE Award.

Honored for her work cancer sufferers, especially children such as Connor Michalek, the inspiration for the WWE charity Connor’s Cure.”I first met Connor backstage and you could tell he was sick from the way he looked but you would never guess from his personality,” McMahon then said in a video montage. Connor was later invited by McMahon and her husband Triple H to appear in a WWE ring.

“The last time I saw Ronda she had me in an arm bar … so I am really grateful she hugged me just now. To be a part of Stuart Scott’s legacy of hope and to live a life with purpose is not something I take lightly,” McMahon said during her acceptance speech.

“There is truly nothing better to put a smile on a child’s face for a few moments … or make them forget that they are sick when they meet their idols. I will never forget the choke-out hug that Connor gave me in WrestleMania,” she said, asking Connor’s father to stand up for an ovation.

“It’s our mission to put smiles on people’s faces, that’s what our company stands for … no child should ever suffer from cancer, they should never be sick,” McMahon added.

Friend of TheWrap’s CEO Sharon Waxman, Katie Couric said she was delighted to be at the event to support the youth tennis program that she works with.

“I want to thank ESPN for everything you do to help Stand Up for Cancer and the V Foundation,” Couric said when she took to the stage. “Jimmy V stood in front of us 25 years ago and told us all ‘never give up.’

ESPN president John Skipper took time out from talking with executives to pose with Special Olympics gold medalist Daina Shilts as she conducted interviews on the red carpet. The snowboarder gushed with pride when Skipper said he remembered meeting her at the world winter games in Austria. Next up, Daina will get to meet Michelle Obama at the ESPYs when Special Olympics founder Eunice Kennedy Shriver is honored.

“We created this event to honor people in sports who do great things and you’d never know it,” Skipper said during the Humanitarian dinner. “We also created it to honor Stuart Scott and we are pleased that his daughters are here with us.

“Whenever I am asked which athlete has stood up for the community and his culture, it is the same answer since I was 10 years old: Muhammad Ali,” the ESPN boss continued.

“There can be no more fitting way to show what we honor. In Arabic, Muhammad Ali means praiseworthy one. It was an apt choice,” he added. 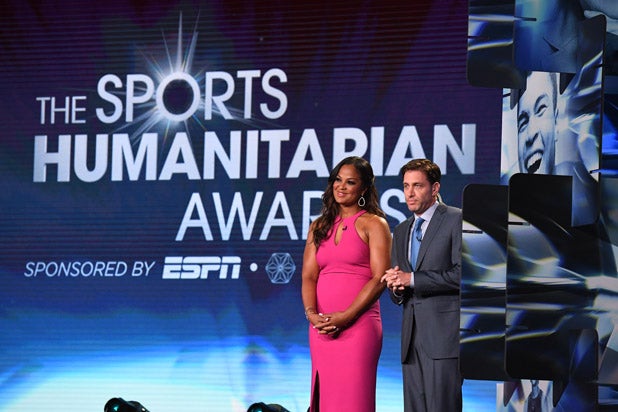 Laila Ali then returned to the stage to tell the audience that as much as her father talked “and he talked a lot — he was a man of action.”

She went on to present the Muhammad Ali Sports Humanitarian Award to Mark Giordano, team captain of the NHL Calgary Flames, for his work with local schools and underprivileged youths, encouraging them to attain their goals no matter how far out of reach they may seem. His Team Giordano program provides resources to 1,900 students, promoting physical fitness, academics and positive behaviors.

“To be mentioned in the same sentence as Muhammad Ali is a great honor,” Giordano said, before thanking ESPN and everyone involved in the event — and his pregnant wife. “I’ve never been to anything like this before, and it’s been great.”

Even among the seriousness, there was plenty of fun going on, such as former NFL star Shawne Merriman gushing over seeing his own idol, skateboarder Tony Hawk on the red carpet.

ESPN veteran and NFL guru Chris Berman made a public appearance following the recent death of his wife, telling TheWrap how touched he was by the outpouring of support he and has family has received since her passing. Normally covering the MLB All-Star weekend, this was the first time Berman had the opportunity to attend the Humanitarian Awards, despite being a staple at the ESPYs for decades.

Also Read: ESPN Veteran Chris Berman Is 'Overwhelmed by the Outpouring of Love' in Wake of Wife's Death

Always a firecracker on the red carpet, George Takei was excited to talk about everything from growing up in L.A., being named after a British royal, and his dislike of Donald Trump (spoiler alert: he’s really not a fan).

Takei was joined by good friend Lance Bass to present to the Orlando City Soccer Club, who banded together to help victims of the Pulse nightclub shooting.

“Power” actor Omari Hardwick made an appearance to present the Team of the Year Award to the San Francisco 49ers. Earlier he told TheWrap that it’s so important for sports stars to do philanthropic work as many of them came from inner cities or communities in need.

Grammy winner Patti LaBelle closed out the night with awe-inspiring performance from her latest release “Bel Hommage,” accompanied by a brass quartet.

Other notable names in attendance were “SportsCenter” host Cari Champion and actress Angie Harmon, who attended as an ambassador of UNICEF USA.

The net proceeds of the event will benefit the Stuart Scott Memorial Cancer Research Fund at the V Foundation. ESPN will grant a total of $100,000 to the charities of the winners and $25,000 for each of the finalists.

More than $1.1 million was raised through the Sports Humanitarian Awards, which will benefit the Stuart Scott Memorial Cancer Research Fund at The V Foundation. Additionally, ESPN will grant an additional $1 million to the charities of the nominees and winners. In total, more than $2 million will be distributed to the community as a result of the initiative.

Highlights of the evening will be showcased during a one-hour program on ESPN, July 25, at 7 p.m. ET.