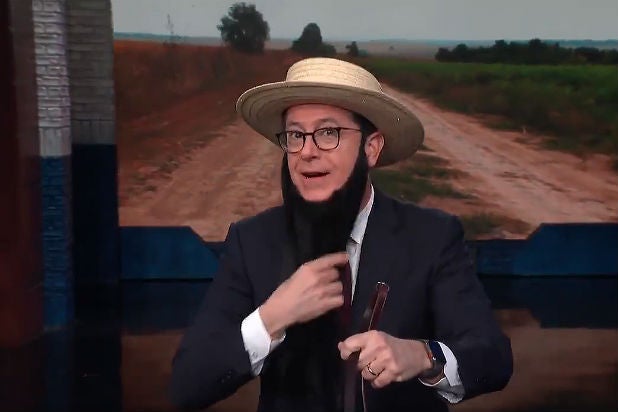 Stephen Colbert has a solution for #DeleteFacebook-ers who want to escape from the social network’s data collection but still enjoy the things they like about it: Amishbook, or Facebook, “without the electricity.”

Colbert brought up Facebook’s ongoing data-management PR problem at the top of Friday night’s episode of “The Late Show,” saying that “we’ve learned over the last few days that you’re not the customer, your life is their product, and Facebook is the pimp.”

Colbert nodded to the #DeleteFacebook movement, in which people delete — or at least announce intent to delete — their Facebook accounts as a statement against the company’s management and mismanagement of user data.

People are deleting their accounts “right after checking to see if their ex’s new boyfriend has a six-pack. He does, and she seems happier with him,” Colbert joked.

Colbert bragged that he doesn’t actually have a Facebook account of his own — “You know nothing about me, Suckerberg!” — but noted that some of his staff have pointed out to him some of the sneakier things Facebook does with user information. “It seems like the only way to defend your privacy is to be off the grid,” Colbert said.

Also Read: You Won't Believe How Much Facebook Knows About You

So Colbert unveiled “Amishbook,” which he promised is “everything about Facebook except the electricity.” He then showed up looking a little like “Weird Al” in the “Amish Paradise” video.

TONIGHT: With #Facebook under fire from users and the government, Stephen senses that the time is right to launch a new social network. #LSSC pic.twitter.com/gTzpmsIMHe