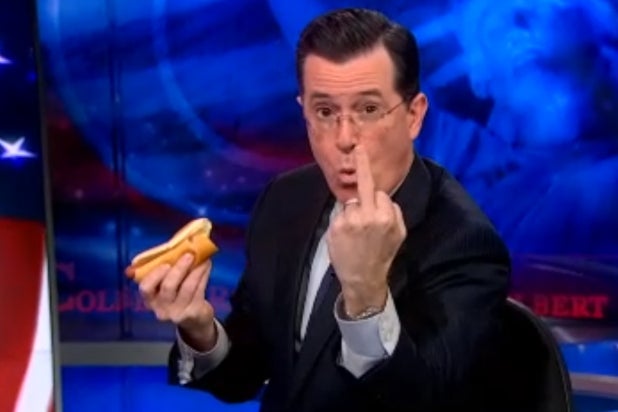 Stephen Colbert has an ad pitch for the Obama administration and U.S.A. Tourism. It goes like this: “America: Come or Don’t, We Don’t Give a Shit.”

Not that American needs to advertise its greatness, the hot dog-holding Colbert says. “It makes us seem desperate, like Jamaica or The Democratic Republic of Sandals.”

Message not received by the current administration and tourism council, as the new commercial for “Discover America” features what Colbert describes as “multi-racial bands” and “Hindu festivals” — visuals that he says don’t accurately portray this nation, in an advertisement that doesn’t need to exist.

“What kind of ad for America is that?” Colbert asked. “Where are the toddler pageants? Where are the guns? Where is the lap-band surgery?”

“Great campaign Obama,” he continued. “When I’m pushing my way through Times Square I always think, ‘Why can’t we have more drunk Euro-teens taking photos with a crusty bootleg Elmo?'”

But the all-too-real commercial gets weirder. Ever go “para-hawking” before? That’s where you skydive and an eagle lands on your arm — which apparently Americans do. It’s in the “Discover America” ad, which you have to see to believe.