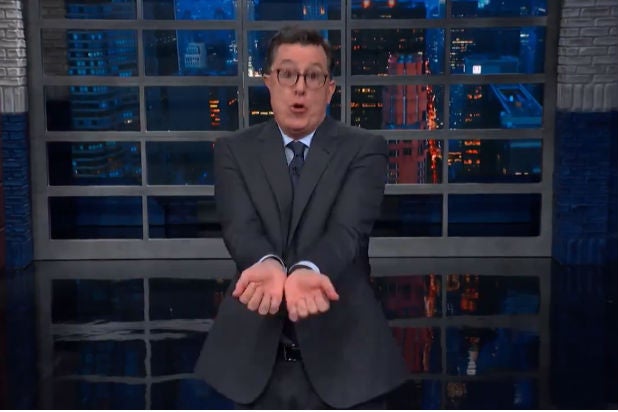 On Friday, Stephen Colbert had some fun at Kellyanne Conway’s expense after a government watchdog agency said she should be fired for violating the Hatch Act, describing the situation as “not the best employee review.”

On Thursday, the Office of the Special Counsel — which is not related to special counsel Robert Mueller — recommended that Donald Trump fire her, calling her a “repeat offender” who has violated the Hatch Act multiple times, and that “her actions thus erode the principle foundation of our democratic system — the rule of law.” (The 1939 law prohibits employees in the executive branch of the federal government from engaging in certain kinds of political activity.)

“OK. Not the best employee review,” Colbert said during his “The Late Show” opening monologue, before switching to an impression of that review. “OK, Kellyanne, come on and have a seat. OK, there’s some positives and some negatives here. Says here, for one, you’re a cancer on the republic. But, on the bright side, you are punctual.”

Colbert also took a bewildered look at Conway’s reaction to the whole thing, including the time a couple of weeks ago when she mocked the Hatch Act itself, rolling out an impression of Conway should she be arrested (unlikely, since Trump has said definitively he won’t fire her).

TONIGHT: Trump's counselor, Kellyanne Conway, is in trouble for violating the Hatch Act and she doesn't care at all. #LSSC pic.twitter.com/AA9KhiQfrH