“Late Show” host Stephen Colbert rolled out another of his recent favorite monologue topics on Wednesday: the Senate race in Pennsylvania between Dr. Mehmet Oz and John Fetterman.

After an opening where he sent his well wishes to those dealing with the hurricane situation in Florida, Colbert dug into his joke bag, turning to the political face-off that has caught national attention. Colbert’s latest fodder was Dr. Oz’s recent comments on a podcast about opponent Fetterman’s trademark look, which includes a hooded sweatshirt. 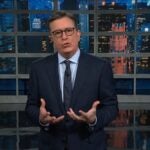 Also Read:
Stephen Colbert Is Not OK With Italy’s New Right Wing PM Being a Huge ‘Lord of the Rings’ Dork (Video)

“One event that will not be delayed is the midterm elections, and things aren’t looking great for Republican Senate candidate and vampire distracted by your throbbing jugular, Dr. Mehmet Oz,” Colbert said, adding a colorful description to an image of the candidate.

He continued: “Dr. Oz has been trailing in the polls for the whole race behind Pennsylvania lieutenant governor and half-finished Willie Willie, John Fetterman. Recently, Oz went on a right wing podcast and pointed out that Fetterman often wears hoodies and cargo shorts on the campaign trail, then tried to use those fashion choices to somehow attack the lieutenant governor – only his insult didn’t really come across as very insulting.”

Colbert then played a clip, where Oz said, “When he dresses like that, it’s not an accident. He’s kicking authority in the balls. He’s [saying] I’m the man … I’ll show those guys who’s whose boss.”

As the CBS “Late Show” host pointed out, that critique might not have come across the way Oz intended it to.

“Yeah, way to stick it to Fetterman — by making him seem cool?” Colbert asked.

“I’ll tell you when Fetterman dresses like that,” Colbert said, putting on a determined voice, “he looks like a man you don’t want to mess with, a man who knows what he wants. Also, have you seen how huge he is? I just think I’d feel safe cradled in those burly tattooed arms.”

The host then added: “Not long after that interview, Fetterman responded with this actual tweet showing his new logo: ‘Fetterman: Kicking Authority in the Balls.’ That’s how you do it.”

You can watch the whole monologue in the video above. 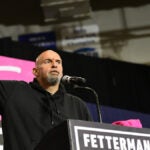 Also Read:
John Fetterman Claps Back at Tucker Carlson’s Tattoo Critiques: ‘They Are Reminders of the People We Have Lost’
x