John Fetterman clapped back at Tucker Carlson’s critique of his tattoos in an op-ed Sunday explaining the nine dates tattooed on his right forearm represent a date on which “someone died violently” during his term as mayor.

“So let’s talk about the tattoos that Carlson seems to be so interested in,” Fetterman wrote in a NBC News opinion story published Sunday. “Each one is a day on which someone died violently in Braddock, Pennsylvania, while I was mayor. Gun violence and violent crime might be a joke to someone like Carlson, but they are very real to people in towns like Braddock.”

The Pennsylvania Lt. Governor’s op-ed comes less than a month after the Fox News host ridiculed Fetterman’s tattoos for nearly 20 minutes, calling them a “costume” and using demeaning phrases like “all your stupid little fake tattoos.” This segment functioned almost as a call to action for Fetterman, who will go head-to-head with Republican candidate Mehmet Oz in the upcoming Pennsylvania race for a U.S. Senate seat. 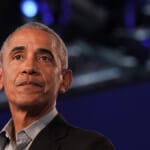 Fetterman then lists the fatal incidents that happened during the 13 years he was mayor of Braddock that are inked into his skin, with “01.16.06” signifying the date on which Christopher Williams was shot dead while delivering pizzas, “02.03.07,” representing the day 23-month-old Nyia Page was found dead and “09.16.13,” marking the date father Derrail Roilton was found dead after being shot three times.

“That’s why I have these tattoos,” he continued, noting that many of the tragic deaths became normalized as a “talking point in our elected leaders’ speeches and footnotes in media stories.” “They are not some ‘costume.’ They are reminders of the people we have lost and what I am fighting for. Both the dates on my right arm and the “15104” on my left — Braddock’s ZIP code — are personal to me.”

He also underscored that getting tattoos “isn’t how most politicians would express their connection to their communities,” but that the choice felt right to him and that didn’t care what anyone else thought.

“My decision to mark these deaths with tattoos was inspired in part by their permanence — the fact that these people, their stories and my town will be with me forever,” he said, noting that many victims of these murders are young Black men. “As mayor, I always felt a sense of obligation and responsibility for tragedies that happened under my watch.”

The democratic candidate unsurprisingly shifted his attention to the upcoming election at the conclusion of his article, saying that “one of the core differences” between himself and Oz is that Fetterman was a “hands-on mayor and showed up at almost every crime scene because I felt a sense of duty to our community.”

“While he was making millions of dollars peddling miracle cures from a TV studio in Manhattan and living in a mansion on a hill in New Jersey, I was rolling up my sleeves and putting in the work to make my community safer,” he wrote. “I’m the only candidate in this race who has fought violent crime and won.”