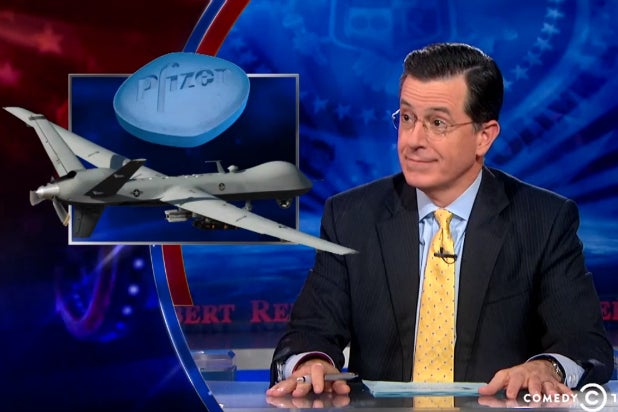 Stephen Colbert loves his homeland and will defend its use of force to the bitter end.

“The United States is the world’s policeman — that’s why we eat so many donuts,” the Comedy Central host quipped.

The U.S. is under attack from international human rights groups who accuse the country of killing dozens of civilians in Pakistan and Yemen with drone strikes, which could amount to war crimes.

The Comedy Central host takes exception with that, because our nation has made it clear that we operate our drone strikes with “surgical precision.”

“Because the best way for a surgeon to remove your appendix is by hellfire missile,” Colbert said. He added, “We may have vaporized your liver, kidney and spleen — but your appendix is on the run.”

Also, the attacks have been a boon for the economies of the victims, the comedian said — so its not all bad. Below the circling drones, sales of anxiety meds, sleeping tablets and even erectile dysfunction pills have soared.

“There’s a reason that Cialis couple is sitting outside in bathtubs,” Colbert explained. “Because that’s all that’s left after the drone blew up their house.”