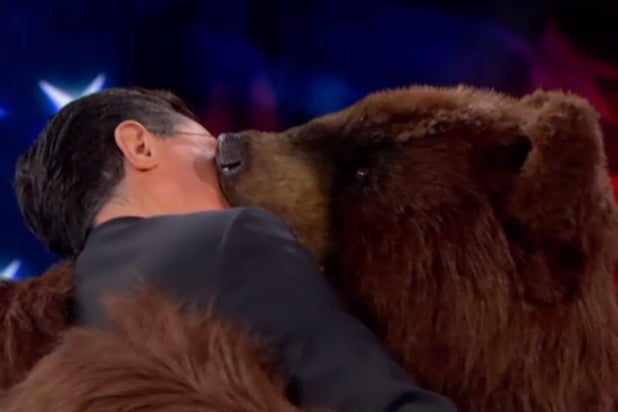 The TV business is in the thick of the November sweeps period, and Stephen Colbert is not above pulling a stunt to boost ratings. His ploy? Lesbian puppies giving him a rectal exam. Sorry, puppies.

“But when it comes to blowing it out for ratings, no one blows harder than ‘Good Morning America,'” Colbert suggested.

The Comedy Central host ripped “GMA’s” “actual news guy” Matt Gutman for dedicating his week to reporting on survival tactics, such as fending off bears or sharks.

Since those attacks are a very rare occurrence, Colbert dedicated the rest of his own segment to providing tips for getting through more frequent incidents, such as being hurt by a household bucket or pail. And then it got really weird.

When the comedian predictably got a real-life bucket stuck on his own head, it was ironically a bear who saved his life.

Overcome with gratitude, Colbert makes out with the grizzly, and even goes a little further later in a filmed clip. Spoiler alert: It’s bear sex.

See video: 'The Daily Show' Has White People Explain Why Latinos Are So Damn Terrifying (Video)