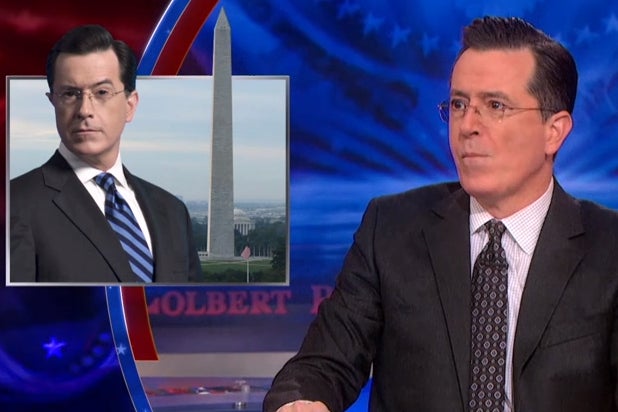 Stephen Colbert only has 11 shows left behind his Comedy Central desk, and the incoming CBS “Late Show” host isn’t going out with a whimper — he’s going out (partially, at least) with a super-long-named Washington, D.C. special.

Immediately after promising that he has no time for a “shameful, last-ditch ratings grab,” the comedian announced Tuesday night that the following Monday’s show will take place from the nation’s capital. The special will be called “Stephen Colbert Presents: Mr. Colbert Goes to Washington, D.C. Ya Later, Legislator: Partisan Is Such Sweet Sorrow: A Colbert Victory Lap 0’14.”

The telecast, which Colbert then dubbed “The million me march,” will take place at The George Washington University’s Lisner Auditorium. The Comedy Central character promised he would “finally provide the Washington Monument a proper pair of balls.”

Later, the late-night personality torched casual dining chain TGI Fridays for its plan to use mistletoe-carrying drones this holiday season.

And watch Colbert take the Fridays drones to task: