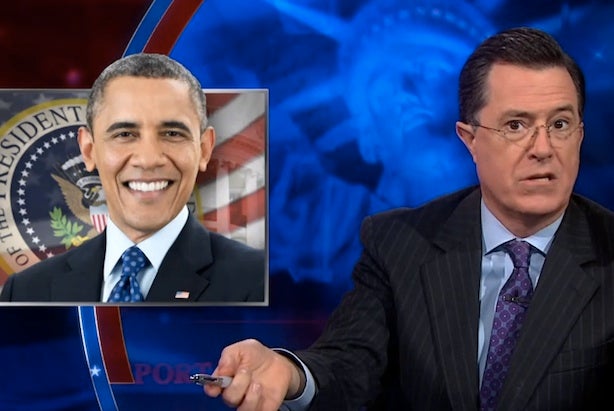 Stephen Colbert marked the one-week anniversary of the federal government shutdown by playing the blame game, and his finger landed squarely on 1600 Pennsylvania Avenue.

“The President is stubbornly refusing to negotiate on Obamacare even though the Republicans have been very flexible,” Colbert said on Monday’s edition of “The Colbert Report.”

As evidence of their willingness to meet President Obama half-way on  implementing the Affordable Care Act, he showed footage of certain Republican legislators offering up sensible solutions.

In one clip, Texas Sen. Ted Cruz noted he wanted to repeal every word of the law, but he was willing to settle for simply defunding it, while in another Kentucky Sen. Rand Paul helpfully offered the compromise position of a one-year delay on the implementation. So they’re clearly willing to negotiate.

“Every one of those offers is a compromise from the Republicans’ initial offer –having Mitt Romney be president,” Colbert said. “But surprise, surprise, Obama wouldn’t negotiate on that either.”

As lawmakers helpfully noted in press conferences and on news programs, furloughing federal workers is not a game.

To mark the lack of fun being had in the Beltway, Colbert cooked up the perfect diversion, “Not a Game: The Official Government Shut-Down Home Game”  from the makers of “Not Sorry” and “Operation Denied Due to Pre-Existing Condition.”

Game pieces include a donkey to represent Democrats, an elephant to signify Republicans and a bug up the elephant’s ass to embody the Tea Party. As Colbert explained, players set a timer to represent the looming debt ceiling and then promptly ignore it.

Get it before it flies off store shelves.