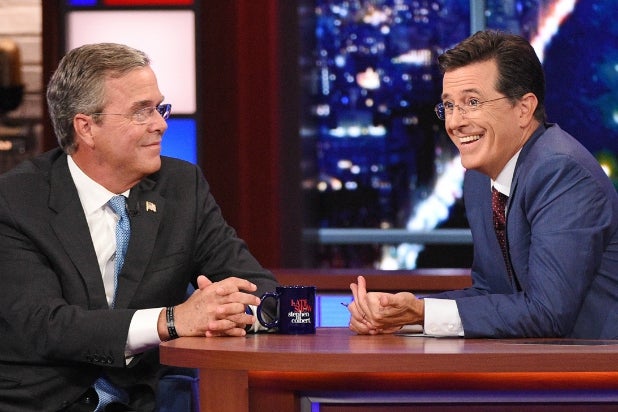 After Jeb Bush raffled off a chance to come see him appear on the first episode of “The Late Show With Stephen Colbert” in exchange for donations to his presidential campaign, Colbert raffled off a chance for a viewer to have Colbert ask Bush any question in exchange for a donation to The Yellow Ribbon Fund. In a bonus segment posted Tuesday night, Colbert asked the winner’s question.

“President Obama has said that the greatest frustration of his presidency is the lack of movement on gun control legislation,” Colbert said, reading the question . “Most of the country favors a system of prudent checks. Even so, a well-organized minority has stymied all progress, and almost weekly we see the deadly consequences. How do you square this with real democracy and what are you prepared to do about it?”

Bush touted the “simple checks” in place in Florida, the state where he served as governor, and where, he claimed, gun violence “is way down.”

During the portion of the Bush interview that aired on the show, Colbert also asked Bush how he would differ, policy-wise, from his brother, former President George W. Bush.

“I think my brother didn’t control the Republican Congress’ spending,” Bush said, adding that the former president “should have brought the hammer down.”