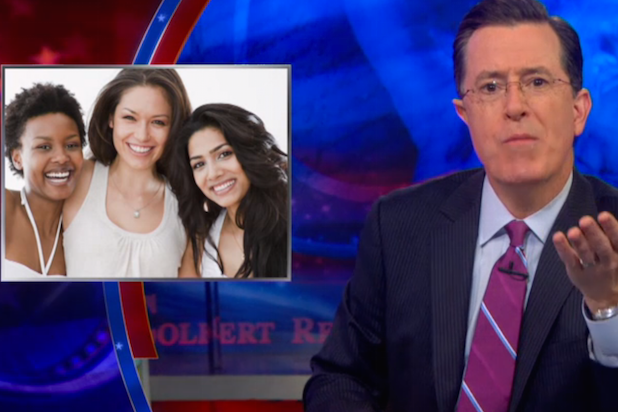 When it comes to women in the workplace, Stephen Colbert believes in separate and not equal.

“I don’t think it’s any secret and I hope that everyone out there knows it, I’m a huge fan of women,” Colbert said on Wednesday’s edition of “The Colbert Report.” “But I don’t feel I need to pander to them. They’re too smart for that.”

The Comedy Central host came out against President Obama’s recent moves to make compensation levels more equitable  for women. The White House claims that salaries for females lag behind those of their male colleagues, but Colbert found a silver lining in the paycheck gap.

To combat the inequity, President Obama recently signed executive orders, one of which is designed to promote more transparency when it comes to salaries so women will know if they’re being paid fairly.

“There’s already plenty of transparency, that’s why it’s called the glass ceiling,” Colbert said. “You don’t want to stand on that thing in a skirt.”