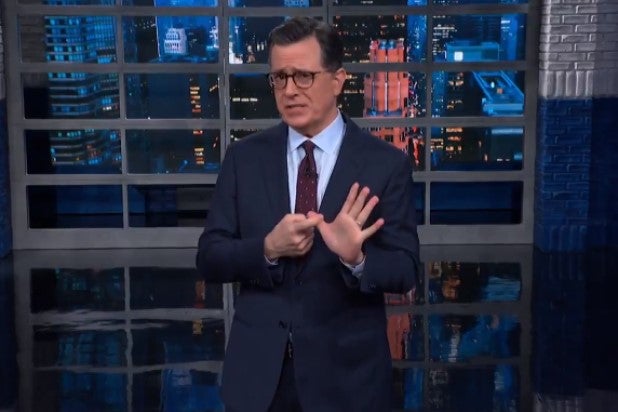 Colbert’s long list included: “the DMV, the dentist, someone else’s child’s clarinet recital, a Soviet gulag [work camp], covered in honey and staked to an anthill, sliding down a 5o-foot razor blade into a bathtub full of gin, and in conversation with someone who knows a lot about Bitcoin.”

His list was followed with a soundbite of Trump boasting about his election numbers.

“And don’t forget, in 2016, people came from the mountains, and the valleys and the rivers and the oceans,” the president said. “They came from all over.”

Colbert then turned on his Trump impression, boasting, “All my biggest supporters were rising from the oceans. I got the Kraken, Godzilla, the Little Mermaid, Bo Derek, that fish guy that won the Oscar for having sex with a girl.”

Watch the “Late Show” clip below:

TONIGHT: After being booed at sports arenas for the last few weeks, Trump finally found some cheers at a MAGA-KAG rally. #LSSC pic.twitter.com/fsHH9BuzAT

The president is expected to make another visit two days to Lousiana before the Nov. 16 election to help Rispone try to unseat Democratic incumbent John Bel Edwards.