“The Late Show With Stephen Colbert” had Speaker of the House Nancy Pelosi as its main guest Monday night, and while she shared enthusiastic optimism that the Democrats “will hold the house” in November’s midterm elections, Colbert was more measured in his assessment.

“The polls still aren’t reflecting necessarily what you’re saying,” he asserted, grilling the speaker a bit on the claim. 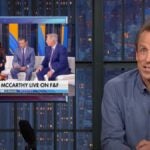 Colbert, noting her use of the past tense for an election that hasn’t yet happened, jumped in: “It is on the ballot,” he said. “You’re sounding a little bit like you’re talking in the past tense, if you don’t mind me pointing that out. We’ve still got more than a month to go. The polls still aren’t reflecting necessarily what you’re saying. Do you believe in the polls?”

Pelosi then clarified that she said “was on the ballot,” past tense, to indicate “when people decided to run, and now here they are doing very well in their districts.”

Speaking further to Colbert’s concerns, she compared the midterms, now five weeks out, to the horse racing that one may find in her native state of Maryland. “When you’re in the lead and you’re in the stretch, you whip the lead – and that’s what we are doing. We are whipping the lead to ensure a democratic victory.”

Watch Speaker Pelosi’s full “Late Show” interview with Colbert in the video above. 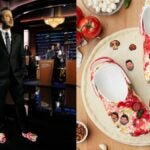 Also Read:
Kimmel Gets His Own Pizza-Themed Crocs for Charity and Honestly, They’re Good (Video)
x