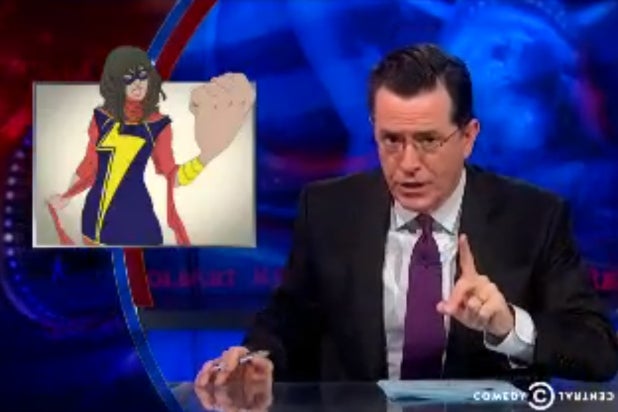 Stephen Colbert is outraged at Marvel Comics’ reboot of the once all-American Ms. Marvel character as a shape-shifting Muslim teenager.

The Comedy Central host is a big fan of the skinny graphic novels. Why? “They have everything I love: colorful pictures, and a lack of grammar,” he said. “Hulk Smash?” Colbert offered up Wednesday. “Stephen like.”

But the fanboy can’t get behind this one: “A Muslim cannot be a superhero — for Pete’s sake they’re on the no-fly list,” the comedian deadpanned.

“If she could shape shift, that means literally anything could be Muslim,” he added, inciting fear that your lamp, sandwich, tiger or former NBA center could be Muslim.

And it surely does not stop with a comic book these days, the “Colbert Report” host worried. There are movies, action figures and huge promotional campaigns behind these Marvel heroes.

“The next thing you know, my kids are dressing up as her for Halloween and shouting, ‘Trick-or-Treat, death to Captain America!'” Colbert concluded.