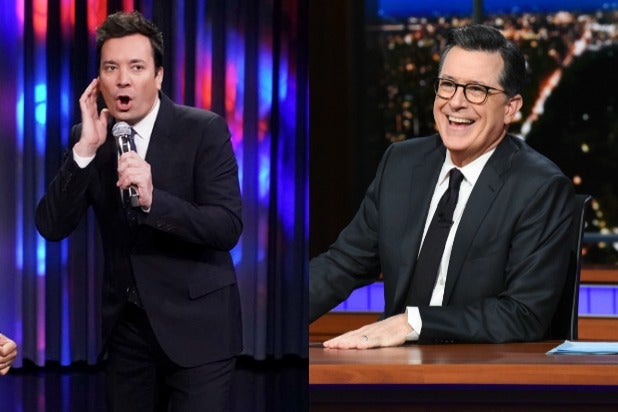 Stephen Colbert has dethroned Jimmy Fallon in demo ratings: The “Late Show” now leads the “Tonight Show” (and “Jimmy Kimmel Live!” for that matter) among adults 18 to 49.

The margin for this season’s current 1-2 rankings is incredibly thin. Considering Colbert has been dominant in total viewers for a while now, this is the very first time he could claim being No. 1 outright.

Based on the latest Nielsen data, Colbert just barely edges Fallon, with a 0.54 demo rating vs. a 0.53. Here’s a more digestible stat: CBS’ “Late Show” is currently averaging 692,000 viewers in that all-important demographic, NBC’s “Tonight” is close behind with 686,000. Jimmy Kimmel is averaging 510,000 audience members per episode over on ABC.

Also Read: Ratings: 'The Voice' and 'The Bachelor' Tie - and So Do Their Networks

The Colbert-Fallon race among adults 18-49 is so tight that it will likely go back and forth for the remainder of the season. Jimmy Kimmel is a pretty distant third in both key categories.

It’s worth noting here that Colbert aired reruns last week, which actually works out in his favor as those are omitted from seasonal averages. Fallon aired originals, which are counted. At this point in the season, barring sweeps or another special week, that will generally only hurt.

Back in November, TheWrap and others reported that Colbert’s “Late Show” beat Fallon’s “Tonight Show” in demo ratings for the first week ever. Ultimately, when the data was finalized, that preliminary Colbert victory actually ended up being a tie between the two biggest late-night shows.