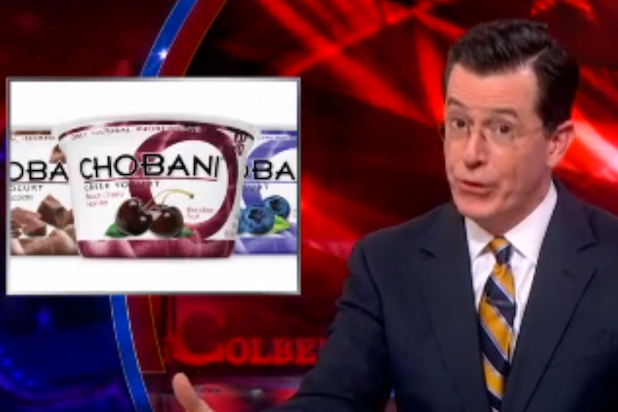 Russia has erected a yogurt blockade, one that is preventing U.S. Olympians in Sochi from receiving 5,000 packages of creamy goodness.

“Our athletes’ yogurt is being embargoed, but it is only because the Russians want to protect traditional family-style values,” “The Colbert Report” host said.

After all, the strawberry, blueberry and peach flavored Chobani products are suspect.

“It’s no secret that yogurt is the gayest dairy product.,” Colbert said. “First of all it’s greek style. It longs to be in the mouth of John Stamos. And, hear me out, hear me out, need I mention, fruit on the bottom.”

The yogurt crisis isn’t the only oddity making headlines as the Winter Olympics gets underway. U.S. journalists have had a field day tweeting and writing about shoddy hotel rooms, unpaved streets and uncovered manholes. It’s a sign that Sochi may not be prepared to handle the crowds, but it’s also a little surprising.

“Given the anti-gay laws, you’d expect Putin to cover the manholes,” Colbert said.