Stephen Colbert on Thursday’s “Late Show” reacted to the news that former president Donald Trump once tried to pay his lawyer with a horse.

“I don’t know why we’re surprised, after all he did describes himself as a ‘stable genius,'” Colbert joked.

It was one of many of the CBS late night host’s barbs centering around Trump’s latest legal issues, including putting together a legal team to defend himself over the Mar-a-Lago search where classified documents were found on the property.

“Tomorrow both his lawyers and the Department of Justice are supposed to submit their suggestions for a special master to review the stuff they found at Mar-a-Lago,” Colbert said. “Thing is, [the] former president might not be getting the best legal advice because he is reportedly having a difficult time finding lawyers to represent him.

“What?!” Colbert continued in mock surprise. 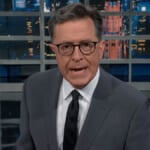 Also Read:
Colbert on Trump Having Foreign Nuclear Secrets: They’re Safe at ‘Mar-a-Lago Waffle Bar Between the Syrup and the Nutella Bucket’ (Video)

The “Late Show” host, who still doesn’t refer to Trump by name, suggested the ex-president’s reputation for not paying legal invoices may be a contributing factor to the issues with putting together a legal team. And he had another idea, too.

“One possible reason lawyers don’t want to work for the ex-prez is that doing so puts them at the risk of being disbarred for breaking law, and they don’t even get paid to break the law because the former president has a reputation for ignoring bills,” he said, adding, “To which Eric [Trump] said, ‘I know how you feel, Bill. I know just how you feel.'”

As Colbert continued his Trump legal bit in the early minutes of Thursday’s monologue, the late night host put in a plea for the Mar-a-Lago situation to head to court.

“Right now the former president is struggling, struggling mightily to find a good lawyer because his current legal team consists of a Florida insurance lawyer, who has never had a federal case, a former host at far right One American News and a past general counsel for a parking garage company. Please, Lord, I don’t ask for much. But please let this go to trial,” he said. “‘Objection, Your Honor. The prosecution forgot to get their charges validated and the Jamba Juice.'”