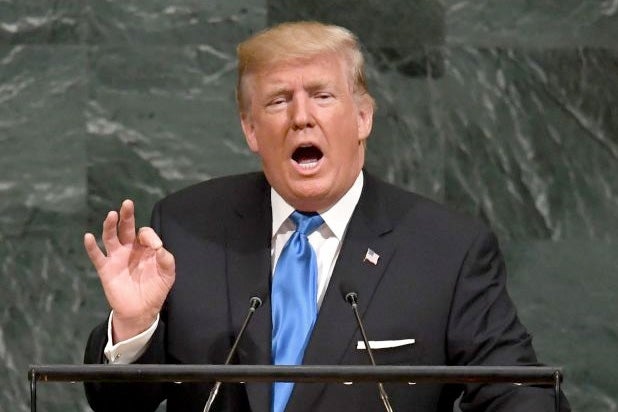 During the opening monologue on tonight’s episode of “The Late Show With Stephen Colbert,” the host added his voice to the online bonfire Donald Trump sparked after he invented a fictional African country while speaking to actual African leaders.

On Wednesday morning, during a speech given at a luncheon for African leaders, Trump made reference to “Nambia,” a country whose health care system he said “is increasingly self-sufficient.” Suffice to say, no such country exists (Trump was likely trying, and failing, to pronounce the name of Namibia).

“Now, there is no such country as Nambia,” Colbert said at the top of his show. “Despite that, they will soon have a better health care system than we do,” a reference to the GOP’s latest attempt to repeal the Affordable Care Act.

Colbert continued: “He went on to praise the African republics of NAMBLA, Wango Tango, and Wakkanda.”

TONIGHT: After the President spoke about the wonders of healthcare in #Nambia, Stephen considers moving to the (nonexistent) country. #LSSC pic.twitter.com/UUhH7u1JQ8

Unsurprisingly “Nambia” was trending on Twitter for the better part of the day. Here’s a sample of the savage mockery that ensued after Trump’s gaffe:

Footage of the Prince of #Nambia leaving the @UN after meeting with @realDonaldTrump. // @KagroX @dailykos pic.twitter.com/85vXKH5Q2E

Was #Nambia responsible for the #Bowlinggreen massacre? We may never #Covfefe

I just got an email from #Nambia. Apparently my cousin, a prince, died and left me millions of dollars.

#Nambia is the world's leading exporter of covfefe. https://t.co/D4YrQmPeZC

The alternatives were "Wakanda", "Zamunda", "Busch Gardens" and "Everything the sun touches" #Nambia