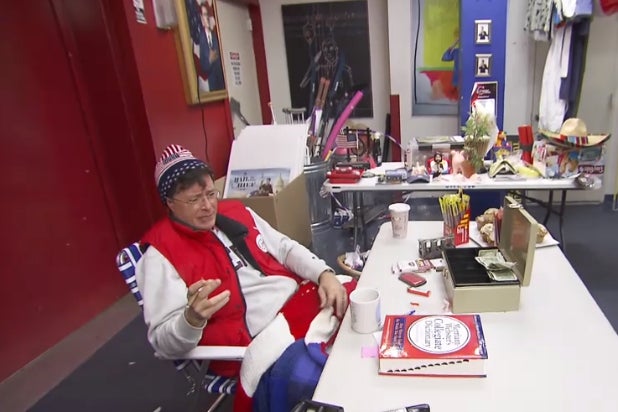 Stephen Colbert is taking the fact that his Comedy Central show coming is to an end way better than the rest of us.

To open his penultimate “Colbert Report,” the conservative character simply announced: “This is my last show that isn’t my last show.”

And to get rid of all of the crap he has collected over the course of nine years in the same studio, Colbert did the most American thing he could think of: He held a yard sale.

The host sold all of his artifacts and props for a mere buck apiece in the New York City fire sale. When one big item — R.E.M. frontman Michael Stipe — didn’t sell for sticker value, Colbert dropped his price to a quarter.

But with several shows left at the time of filming the yard sale sketch, Colbert had to keep some stuff. After Thursday night, however, there will be nothing left. His entire studio will be shredded down to be used as White Castle meat filler, Colbert said on Wednesday’s opening segment.

Later, the incoming CBS “Late Show” host accidentally revealed that HE is the mysterious Banksy. Despite coming out as the famed street artist, the comedian elected to pay another famous tagger — French artist J.R. — to paint his portrait on the roof of the Comedy Central studio.

All that fit was a giant eye — a super-creepy reminder that he will always be watching over Colbert Nation — at least those “stuck in a holding pattern over LaGuardia,” Colbert specified.