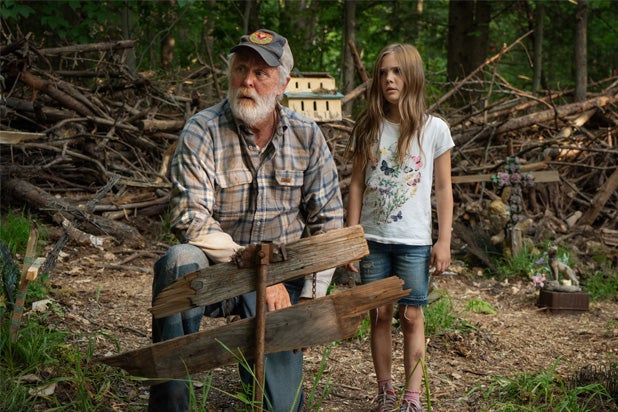 Stephen King is a fan of a major change made in the story to the new film adaptation of his book “Pet Sematary,” even though a lot of King loyalists were not.

The twist was already revealed in the second trailer for the film, so don’t watch or read on any further if you want to avoid SPOILERS, but King says he understood why the filmmakers made the change.

“It’s something different,” King said in an interview with EW. “They did a good job. Boy, I saw all the stuff that came online when people realized that it was Ellie rather than Gage that got run over in the road, and I’m thinking like, ‘Man, these people …’ It’s so nuts.”

In the book, the two-year-old Gage is the one run over by a speeding truck. But the movie “Pet Sematary” has the older child, Ellie, getting killed instead.

EW also spoke with the filmmakers, Kevin Kolsch and Dennis Widmyer, who said that by killing off an older character, it allowed them to explore what an older child returning from the dead might do in a way that a younger actor cannot. King felt this still kept with the spirit of his novel.

“You can take Route 301 and go to Tampa, or you could take Route 17 and go to Tampa. But both times, you’re gonna come out at Tampa!” King said. “You know what I’m saying? It didn’t change anything for me. I thought, ‘Okay, I understand why they did it, because it’s maybe easier to work with a zombie when she’s a little girl than a toddler.'”

“Pet Sematary” currently has a 91 percent score on Rotten Tomatoes, and King reiterated how much of a fan he was of the job the filmmakers did.

While the horror author clearly approves of the new movie, his Corgi Molly, a.k.a. the Thing of Evil, had a very different reaction.

I took Molly, aka the Thing of Evil, to an advance screening of PET SEMATARY. She didn’t come back the same. pic.twitter.com/l2dFgeuvBT