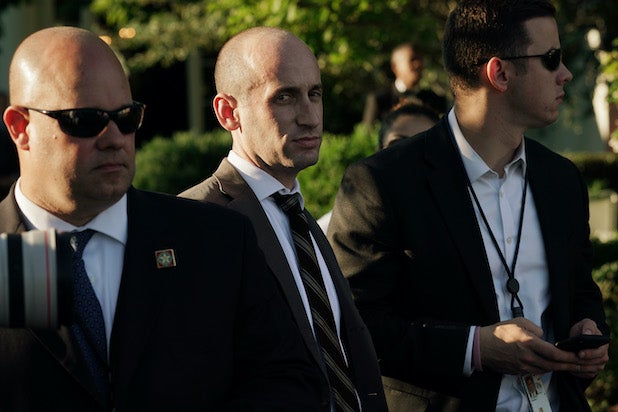 Miller has been considered the architect behind the Trump administration’s anti-immigration policies, including the travel ban against five Muslim-majority countries, family separation at the border, and arrest quotas for immigrants without documentation.

The novel in question is “The Camp of the Saints,” which Hatewatch said is “popular among white nationalists and neo-Nazis because of the degree to which it fictionalizes the ‘white genocide’ or ‘great replacement’ myth into a violent and sexualized story about refugees.”

The fictional plot involves white women being raped by refugees, and racist depictions of Indian characters invading France and eating human feces. Miller recommended that Breitbart cover the novel, after pointing out what he saw as “parallels” between the novel’s extremist depiction of immigration and the pope’s rhetoric in support of immigrants.

Eighteen days later, Breitbart published a piece arguing that “all around the world, events seem to be lining up with the predictions of the book.”

Miller also expressed discontent over the removal of Confederate statues following the murder of nine black churchgoers in South Carolina in June 2015. He also shared links to an anti-immigrant, far-right website started by Peter Brimelow.

The emails were leaked to the SPLC in June by Katie McHugh, a former Breitbart editor who was fired in 2017 after tweeting anti-Muslim sentiments. (She has since apologized and renounced her past views.) McHugh told Hatewatch that she was first introduced to Miller in 2015 by her editors at Breitbart “with an understanding he would influence the direction of her reporting.”

“For that reason, and because Miller would have regarded her as a fellow traveler of the anti-immigrant movement, McHugh sometimes starts conversations with Miller in the emails, seeking his opinion on news stories. Other times, Miller directly suggests story ideas to McHugh, or tells her how to shape Breitbart’s coverage. Periodically, Miller asks McHugh if he can speak to her by phone, taking conversations offline,” the Hatewatch report states.

“What Stephen Miller sent to me in those emails has become policy at the Trump administration,” McHugh told Hatewatch.

In a statement to Hatewatch, Breitbart spokesperson Elizabeth Moore said, “The SPLC claims to have three- to four-year-old emails, many previously reported on, involving an individual whom we fired years ago for a multitude of reasons, and you now have an even better idea why we fired her. Having said that, it is not exactly a newsflash that political staffers pitch stories to journalists – sometimes those pitches are successful, sometimes not.”

“It is no surprise to us that the SPLC opposes news coverage of illegal-immigrant crime and believes such coverage is disproportionate, especially when compared to the rest of the media, which often refuse to cover such crimes,” the statement continued.

White House press secretary Stephanie Grisham said in a statement to TheWrap: “We have not seen the report. The SPLC, however, is an utterly-discredited, long-debunked far-left smear organization that has recently been forced – to its great humiliation – to issue a major retraction for other wholly-fabricated accusations.  They libel, slander, and defame conservatives for a living. They are beneath public discussion.”

Last year, Hatewatch took down and apologized for an article in response to “complaints registered by or on behalf of several journalists mentioned in the article that it falsely described one or another of them as white supremacists, fascists, and/or anti-Semites, and falsely accused them of engaging in a conspiracy with the Putin regime to promote such views.”