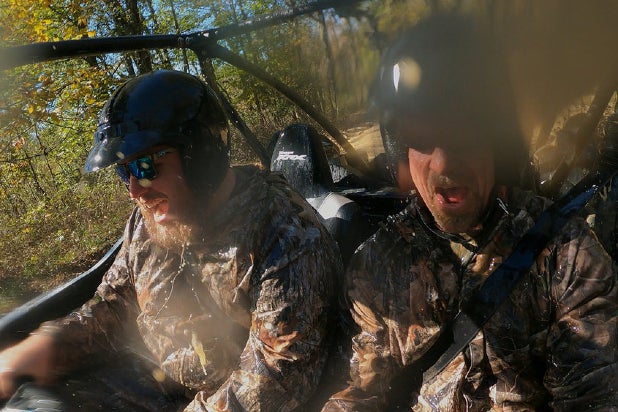 “Stone Cold” Steve Austin has stomped a mudhole in countless pro wrestlers. Tonight, the WWF/WWE legend plays in the mud with country star Luke Combs on the “Straight Up Steve Austin” Season 2 debut.

Combs can’t believe he got to go off-roading with Austin. For his part, Austin can’t believe Season 2 of his unorthodox talk show, which was supposed to begin production on March 30, is in the can and coming to USA Network.

“I didn’t even think we were gonna film [in 2020],” Austin told TheWrap. “A window of opportunity opened up between August and Nov. 3 and we jumped on it. We were able to secure all the guests that we had and do some reshuffling around.”

Good thing they have one hell of a production team — for several reasons.

Austin told us that his only original idea (personally) for Season 2 was “I wanna go four-wheeling with Luke Combs.”

Turns out, Luke Combs also has a pretty great idea on the Season 2 premiere.

“I was hoping maybe we could do the beer smash,” the country-music superstar says midway into tonight’s episode.

If you know Austin, you can probably guess his response: “Oh, hell yeah!”

Combs and Austin, caked in mud and camouflage, bashed a pair of beers together and then chugged. They got some and wore the rest, leading us to ask Austin how much of a two-beer smash he’s actually drinking with that signature move, performed to the crowd — and sometimes the camera — countless nights after an in-ring victory.

“Man, I say when you’re really crashing them together, you’re losing some on the crash and your pouring– I gotta say, you’re probably getting a third to a half of each beer. And that’s just an estimate,” Austin said. “You know these people that say, ‘Ah, you’re wasting all that beer. You don’t know how to drink a beer.'”