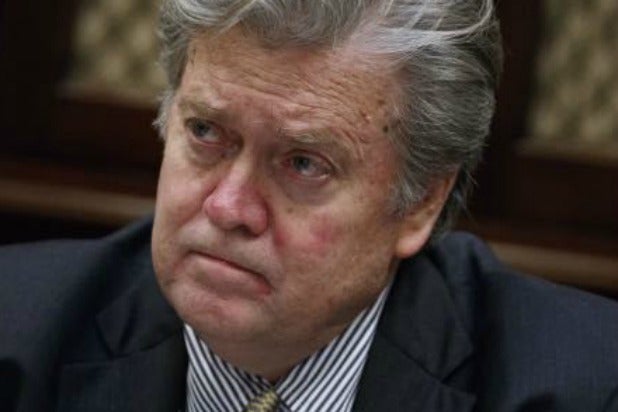 Roy Moore was defeated in his quest to become a U.S. senator on Tuesday, but he wasn’t the only loser: Steve Bannon was a major Moore backer, as many delighted in pointing out.

Bannon helped lead Moore to victory in the Alabama primary over the state’s sitting senator, Luther Strange, but was unable to bring the candidate over the finish line Wednesday. Alabama elected a Democrat to the Senate for the first time since 1992.

“He looks like some disheveled drunk who wandered onto the national stage,” GOP Rep. Pete King told Chris Cuomo on CNN.

Bannon was humble in his first public comments on the loss, which he delivered on Breitbart radio on Wednesday.

‘The Democrats hustled, and people have got to understand: You don’t turn out, they’re going to turn out,” he said. “Hat tip to these guys at the DNC. They slipped in here under the radar scope and did a great ground game. Of  all the other convergence of forces … just out-hustling and outworking people is a big one.”

Democrat Doug Jones, an attorney, won in part because of a large boost from African-American voters. And Alabama Sen. Richard Shelby, who was elected as a Democrat in 1992 before switching parties, announced over the weekend that he would write in another Republican rather than vote for Moore, who spent much of the election denying accusations from nine women that he made sexual advances on them when they were underage in the 1970s. One woman would have been 14 at the time; Moore was in his 30s.

Bannon did not immediately respond to TheWrap’s request for comment.

Here are some other takes:

Bannon’s is a non-falsifiable theory. If he wins, he’s right. If he loses, he’s right. If his guy prevails, his finger was on the pulse; if his guy goes down, he was sabotaged. In a few months he’ll be wandering around a park muttering about the Kulaks. https://t.co/AvsWoPURSr

As we all enjoy Bannon's humiliation in Alabama, I just wanted to take this chance to post my favorite Bannon gif again. pic.twitter.com/YGtkf23hCv

Bannon going back to the drawing board to tweak his candidate recruitment process.

Charles Barkley is 1-0 against Steve Bannon in special elections